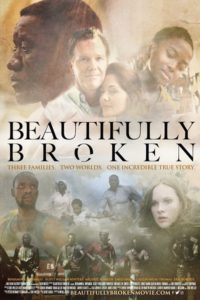 We’re all broken in some way. Sometimes you can see the trials that people are struggling through and other times it can be a hidden secret they carry inside out of guilt, shame or fear that no one will understand. Sometimes that person has suffered unspeakable loss and tragedy yet somehow manage to carry on and find hope through the pain. Others get pulled into a cycle of darkness, rebellion against what they once believed in and risk turning to unhealthy coping mechanisms as they fight to combat the feelings they can’t make sense of.

Based on actual events that occurred in Rwanda during the terrible genocide that left countless dead and numerous without a home, Beautifully Broken, tells the story of one of thousands of refugees, William, his family as they fled the horrors plaguing their homeland as well as the intertwining stories of the various people they encounter along the way.

As the film opens, William, his wife Ebrallie and their daughter Aimee witness firsthand the terror caused by attacks in Rwanda seeing people killed senselessly and nearly losing their own lives as they search for safety. At the same time in the farming communities of Murambi, Rwanda, a man named Mugenzi is faced with the decision of, or rather is forced into, leaving his wife Keza & their baby daughter to join the militia leading the charge and slaying innocent lives. Meanwhile on the other side of the world in Nashville, Tennessee far away from the civil war in Rwanda, Randy & Darla Hartley celebrate their little girl Andrea’s 2nd birthday showing the stark contrast between the lifestyles.

Ten years later, the Hartley family seems to have it all. After attending a concert where they hear about child sponsorship, Andrea asks her family to become sponsors and she begins corresponding with a young girl in Rwanda. Through their letters, Andrea learns of the hardships the girl and her mother face and how much the sponsorship means to them. In a sad turn of events, Andrea is faced with a struggle of her own in which her faith is truly put to the test as her life is turned upside down and she sinks into a spiritual darkness as she carries the weight of her secret.

William and his family have been living in a refugee camp. William is portrayed as a man of strong faith as he relies on God and prays regularly. An opportunity opens for him to travel to America to work with a local church in Nashville, TN, though he must leave Ebrallie & Aimee for the time being. As William continues working with the church, he sees the needs of the other refugees in the area, many of whom are homeless. This inspires William to do something about it which leads to a refugee village being built and William’s family finally being approved to join him in America.

Randy & Darla Hartley’s relationship with their daughter becomes strained as Andrea holds on to her secret. When Andrea disappears, Randy turns to prayer as they frantically search for her. In the process, they discover that something, though they remain unaware of what, happened to their daughter before the dramatic change in her personality. Once the family is reunited, Andrea attends counseling though she is still unable to fully open up to her parents. She also volunteers with the refugee village which impacts her life more.

William’s daughter observes Andrea’s interaction with the kids on the playground and feels that Andrea could not possibly have any problems. William advises his daughter to “speak gently of others, you don’t know what paths they have traveled” and “just because you see no tears, does not mean they have not cried.”

A series of events leads the Hartley’s as well as William’s family to travel to Rwanda together so Andrea can meet the young girl her family sponsored that she had been corresponding with. This trip proves to be one of healing, forgiveness and seeing God’s mighty work in each of the lives involved.

I had been looking forward to seeing this film since finding out Michael W. Smith was going to be a part of it as well as hearing the movie’s theme song, “Beautifully Broken”. When we received a screener to review, I was excited, but I definitely wasn’t fully prepared for what I would experience when clicked “play”. The Beautifully Broken film carries a powerful message that is certain to impact everyone who sees it! It’s one that will take you through every emotion and back again as you watch the incredibly inspiring stories unfold. All of which point to an awesome, faithful God Who is able to take even the most unspeakable tragedies and the most broken individuals and turn them in to something beautiful.