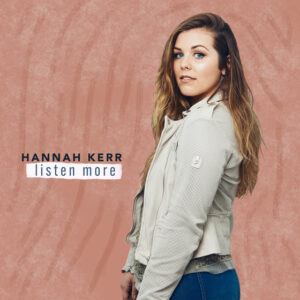 6 March 2020 – Nashville, Tenn – “Ordinary,” the latest single from Black River Christian singer and songwriter Hannah Kerr, debuted in the Top 30 on the Billboard AC Indicator chart. The debut makes Kerr the only solo female artist on this chart this week. “Ordinary” also holds the top spot of Amazon Music’s global Christian playlist “Divine Sound,” with Kerr as the cover of the playlist.

The single, from her latest project, EP Listen More, released last fall and jumped seven spots this week on the Billboard Christian Airplay Chart from No. 43 to No. 36, proving it is already a hit at many radio stations across the U.S. Keith Stevens, Director of Programming for Minneapolis’ KTIS, calls the single “A fresh, upbeat, and encouraging song from Hannah Kerr. The song certainly says ‘Spring’ in the Twin Cities.”

MORE ABOUT LISTEN MORE: The six tracks featured on Listen More are all co-written by Kerr and produced by Mark Miller, who also produced her debut album Overflow, and Riley Friesen (Jen Ledger, FamilyForce5, Building 429). Kerr wrote the EP with new confidence, due to many challenges she has faced over the last few years. Listen More came from a reflective place, while Overflow, which she recorded when she was just 19 years old, came from a place of letting God pour into her and her heart overflowing in worship, thus beginning her ministry in music.

“This really is a ministry,” she shares. “I’m not trying to just throw music at people and hope it sticks. I really want the songs to be something that sparks conversation and will let people know that I’m willing to talk about the things that I’ve been through, and I want to hear what they’ve been through.” Listen More reintroduces Hannah Kerr as an artist who has grown and who is rooted more deeply into her sound, voice, and purpose. Beginning this new life chapter, she is allowing listeners to join her on the journey where she is “figuring out who God is, and in the process, really figuring out who I am.”

Kerr was awarded the Most Played Song award at the 2018 ASCAP Christian Awards for co-writing Matt Maher’s Top 5 hit “Your Love Defends Me.” Her original version of the song appears on her debut album Overflow which has earned more than 20 million streams and features the Top 15 hit “Warrior.” She has shared the stage with major Christian artists including Casting Crowns, Matt Maher, Building 429, Jordan Feliz, Jonny Diaz, Matt Hammitt, as well as for KING & COUNTRY, Newsboys, and Kari Jobe. In 2019, Kerr graduated from Belmont University with her degree in Christian Leadership.
For all of the latest information about Hannah Kerr, visit HannahKerrMusic.com and the social links below.