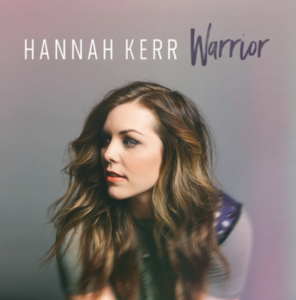 “Warrior,” as well as a pop-infused “Warrior (Battle Cry Remix),” were written by Alyssa Bonagura and Tami Hinesh, and are available now at all digital retailers and streaming services. Nearing 1.7 million streams, “Warrior” is the follow up to her Top 25 single, “Radiate,” from her debut full-length album Overflow. With the success of her debut album and her constant touring, with such major artists as Casting Crowns, Matt Maher, Building 429, Jonny Diaz, and Matt Hammitt, as well as sharing the stage with for KING & COUNTRY, Newsboys, and Kari Jobe, “Warrior” has become a recognizable fan favorite.

“I’m so excited for people to hear this song because when I think about what a warrior is, to me a warrior really can be anyone and everyone,” shares Kerr on her new single. “We all face seasons of hardship and we all have to keep the hope alive and fight through the struggles we go through in this life. To me, a mom, a student, or a soldier fighting for our country is a warrior. Someone fighting against an illness or a disease is a warrior. The list could go on and on. My hope is that listeners are inspired by this song and remember that in the midst of what we are facing, we have a God who is always fighting for us.”

Not only is Kerr’s new single at radio, she is also the co-writer of Matt Maher’s latest radio single, “Your Love Defends Me.”

About Hannah Kerr: As the first artist signed to Black River Christian, Kerr has released her newest single “Warrior” from her debut full-length album titled Overflow, produced by Sawyer Brown’s lead singer and Casting Crowns’ producer Mark Miller. Overflow has been streamed more than three million times and also includes the Top 25 hit “Radiate.” Kerr has toured with such major artists as Casting Crowns, Matt Maher, Building 429, Jonny Diaz, and Matt Hammitt, as well as sharing the stage with For King and Country, Newsboys, and Kari Jobe. Kerr frequently leads worship at contemporary churches across the country as her ministry extends beyond radio and touring. She has been named the 1st Ambassador for Youth For Tomorrow’s Jodi McQueen Therapeutic Music & Arts Center and “YFT Heart Beats” campaign. While handling a busy career, Kerr attends Belmont University in its Ministry and Worship program.

Hannah Kerr began publicly singing at the age of five in her hometown church in Buffalo, N.Y. Even though she grew up in a musical family, she never aspired to become a singer. Eventually Kerr’s family moved to Nashville, Tennessee when she was a teenager and she started approaching her musical talents with the heart of a worshipper and started songwriting and performing. One of her recordings caught the ear of Sawyer’s Brown lead singer and Casting Crowns producer, Mark Miller, and he affirmed Kerr’s calling for a music ministry. She became the flagship artist for Black River Christian. For more information, visit HannahKerrMusic.com.

About Black River Christian: In September of 2015, Casting Crowns’ Mark Hall, veteran producer/Sawyer Brown frontman Mark Miller, and music industry executive, Gordon Kerr, combined their talents and passions to create Black River Christian. Based in Nashville, Tennessee, Black River Christian is committed to spreading the Gospel of our Lord and Savior Jesus Christ through artists who are committed to ministry through music. Partnering with Provident Label Group for distribution, the label officially entered into the Christian music that Fall at the Christian Music Broadcasters Momentum conference in Orlando, Florida to debut their first artist, Hannah Kerr. She has already shared the stage with Matt Maher, Newsboys, Building 429, Jon Guerra, I Am They, and most recently supporting Casting Crowns on their “The Very Next Thing Tour” during Summer 2017. Kerr’s first full length album, Overflow, as well as her newest single “Warrior” and a pop-infused “Warrior (Battle Cry Remix),” are available now at all digital and retail music outlets.