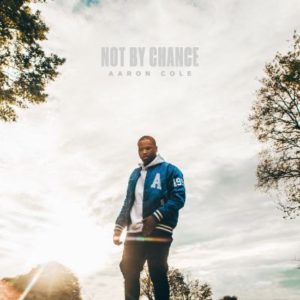 July 30, 2019 (Nashville, Tenn.) — Aaron Cole caught the attention of critics and music fans alike back in 2017 when he garnered two back-to-back #1 singles on the Billboard HOT AC chart. This summer, on August 30, 2019, the 20-year-old will release this first full-length album with Gotee, titled NOT BY CHANCE that will feature 13 dynamic hip-hop tracks appealing to fans of Jon Bellion and Drake.

The record was produced by Chino and Chris King along with with fellow rapper and former Capital Kings member, Cole Walowac who recently produced seven songs on NF’s latest album “The Search.” Together, they created a masterpiece that infuses pop, hip-hop, and soul together to tell his authentic story of growing up in poverty, working hard for your dreams, and standing tall in your faith. NOT BY CHANCE features special collaborations including Derek Minor, 1K Phew, Chastity, Evan Ford, Kaleb Mitchell, and Montell Fish.

“I am very excited and nervous,” shares Cole when speaking at the new album. “I have put so much time, effort, and thought into this project and I’m ready to get it out and see what it’s going to do! I hope people who need to hear it, find comfort in it and are inspired to chase their dreams. If God can take a kid from Bristol, VA who came from nothing to having a record deal and going on arena tours, then He can do that for you too.”

Named as “One of 5 Top Gospel Artists to Watch” by Essence Magazine, Cole’s music journey started when he began rapping at just three years old. After dropping six independent projects, the Bristol, VA native was introduced to multi-GRAMMY-award winning producer and artist TobyMac, who took him under his wing.

“My dude Aaron Cole is about to take it all somewhere special,” shares Gotee Records co-founder & C.E.O. TobyMac. “This is the tip of the iceberg and it just goes deeper and wider from here on out.”

Fans were introduced to “FASHO” and “THERE FOR ME” earlier this year and “WHY” will drop digitally on August 2, 2019; all of which are featured on NOT BY CHANCE. These are the follow-up songs to his previous radio hits, “RIGHT ON TIME” and “ONE MORE DAY” which were each #1 at Billboard Christian Hot AC/CHR Chart as well as Top 30 Billboard Christian Airplay radio singles.

Collectively, the breakout artist has garnered over 38 million streams lifetime across AppleMusic, Pandora, and Spotify and over 12 million views on YouTube. Additionally, he has performed on two arena tours, shared the stage with Lecrae, Andy Mineo and KB, and has been featured on tracks with TobyMac, Hollyn and Derek Minor.

For more information on Aaron Cole and NOT BY CHANCE, please visit www.iamaaroncole.com.