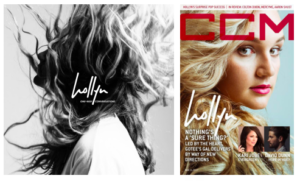 NASHVILLE, TENN. (MARCH 17, 2017) Gotee Records’ HOLLYN is on a roll as her debut full-length album is just over one month old. One-Way Conversations debuted on February 10th hitting No. 2 on the iTunes Pop Albums chart just under Lady Gaga and was in the Top 10 overall of iTunes. The album also released on March 3rd physically to retail. Since the release, Hollyn now has two singles in the Top 25 at Christian radio at different formats (“Can’t Live Without” at CHR and “In Awe” at AC).

In addition to the radio love she’s been receiving, Hollyn has also been recognized by the media with this new album. This week she graces her first CCM Magazine cover on the March 15 issue. And she received shout-outs from two influencers Perez Hilton calling out her radio single, “Can’t Live Without,” saying, “Hollyn is giving us cool (but not too cool or pretentious) pop without trying too hard that feels authentic!” And Sirius XM’s YouTube 15 host Jenna Marbles included Hollyn’s song, “All My Love,” on her most recent playlist.

Hollyn is currently on the 2017 TobyMac Hits Deep tour that continues through April (see remaining dates here). While on tour she has had appearances on Good Day Dallas, TODAY in Nashville and will be appearing on the WGN Morning Show later this month.

One-Way Conversations is the follow-up to her acclaimed debut self-titled EP that produced the No. 1 single “Alone (feat. TRU)”. The release already touts a No. 1 radio single with the track “Love with Your Life.”

Listen to Hollyn’s single “In Awe”

ABOUT HOLLYN: Hailing from Ohio, raised in the church and on the music greats from Lecrae to Southern Gospel, this American Idol alum has been working the past two years on her national debut. Hollyn has a style all her own. Listeners were introduced to this vibrant young lady on TobyMac’s songs “Lights Shine Bright” and “Backseat Driver,” which she is also a co-writer. 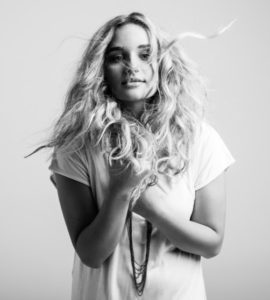 Hollyn’s music has combined for 42 million streams on Spotify, Pandora and YouTube since the release of her self-titled debut in 2015. Her first radio single made radio chart history with 95 percent of the Hot AC/CHR panel adding the single out of the box and spent nine weeks at No. 1. Hollyn has two No. 1 Hot AC/CHR singles plus two No. 1’s as a featuring artist on TobyMac’s “Backseat Driver” & Derek Minor’s “Change the World.”