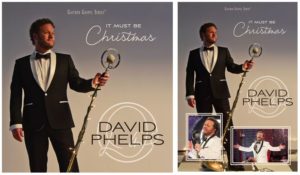 Celebrated, Three-octave Vocalist Brings a Nostalgic, Crooner Flair to Seasonal Songs Old and New
It Must Be Christmas TV Special to Air on Multiple Networks

NASHVILLE, Tenn.–October 19, 2018–GRAMMY® Award-winning, classically-trained tenor David Phelps celebrated Christmas early this year before a LIVE audience on his family farm as he recorded an all-new DVD entitled It Must Be Christmas (Gaither Music Group). Releasing today, along with the companion studio CD recording, the It Must Be Christmas performance video finds David adding all-new arrangements of classic seasonal favorites as well as original creations to his 20-year repertoire of Christmas songs.

“What a privilege it was to gather my friends and family in this unusual, intimate setting to celebrate the most wonderful time of the year!” Phelps described. “Our goal was — in every sense — to record the entire project as a throw-back to the days of excellent live music–before the editing, punches and retakes of many of today’s recordings. I gathered some of the best musicians in the world, rehearsed a couple of times and then hit the floor.”

Hitting the floor and making great art is nothing new to Phelps, who is an accomplished arranger, songwriter, composer and one of the most recognized artists on the Gaither HOMECOMING Series.  Recorded in The Barn @ The Phelps Farm, just south of Nashville, Tennessee, and produced by Phelps, the concert DVD captures the powerhouse vocals one might expect from this three-octave, “who’s who of vocalists.” He brought in a jazz-heavy band for the show including Pat Coil, Danny O’Lannerghty, Greg Ritchie, Alida Osterlin, Kari Lee, Dan Wheeler and Jack Daniels.

“Surrounded by talent at the top of their game, it made me long for a time when every tree had multi-colored lights, doorways were always dressed with mistletoe, stores were closed on Christmas Eve and families gathered in living rooms around crackling radios tuned in to Frank Sinatra singing ‘The First Noel.’”

Background vocals were performed by Daniels; David’s daughters, Callie and Maggie Beth; Martin Young and acclaimed recording artist Charlotte Ritchie. Charlotte, who tours regularly with David, joined him for a special duet of an original “Fall on Your Knees,” an epic ballad based on the lyrics of “O Holy Night.”

“I’ve been looking for something to sing with Charlotte. She and I have never sung a duet before. I didn’t write this song as a duet, so I went back and kind of re-worked it. The challenge with a song like this is ‘How do you take a lyric that is so beloved—not only by the world but by me—and kind of do something different with it?’ My goal was for it to be a Christmas worship song; and when the choir comes in followed by the congregation singing, ’‘Fall on your knees!’ it really took on a life of its own.”

Phelps joins the band with a drum feature on the classic “The Little Drummer Boy,” a favorite on his Christmas tour, which has been an annual event for 20 years. He presents a crooner-inspired flair with seasonal gems “Tennessee Christmas,” “Sleigh Ride,” “Go Tell It on the Mountain” and the newly-penned title cut, “It Must Be Christmas.”

“I wanted this recording to be something more than nostalgic,” he described. “I realized for myself as I wrote for this project that this topic can never be finished being written about. This is the greatest story ever told. It’s not like ‘ok, it’s told…this is done,’ and so all the songs have been written about it. That’s not gonna happen for me and for the world. We’re still gonna be writing songs about this and watching plays about it and reading stories based on it…it is the moment that changed human history, and it will never lose its depth of content.”

The It Must Be Christmas DVD and CD will be positioned heavily at retail, via catalog placements, through a social media campaign and web promotions and through a direct TV campaign, beginning this month on networks including TBN, RFD-TV, CTN, Dish TV, DIRECTV, AT&T U-verse, GaitherTV, FamilyNet, GMTN, Guardian, Liberty, TCT and TLN. The campaign will also air in Canada on Vision TV, The Miracle Channel, Grace TV and CTS.

The products are distributed through Capitol Christian Distribution and Universal Music and will be available throughout general market stores and the Christian marketplace in addition to online retailers including iTunes, Amazon and www.gaither.com. The It Must Be Christmas CD is available now at all Cracker Barrel Old Country Store® locations as well as at www.crackerbarrel.com.

ABOUT DAVID PHELPS
David Phelps is blessed with a vocal instrument unlike any other. The multi-platinum artist and Gospel Music Hall of Fame member first entered the national spotlight when he joined the Gaither Vocal Band and has since performed at Carnegie Hall, the White House and many other halls and churches around the world. Phelps has won two GRAMMY® Awards and four GMA DOVE Awards. His latest work, It Must Be Christmas, showcases his talents as a singer, songwriter, arranger and producer. Phelps lives outside of Nashville, Tennessee, with his wife, Lori, and four children: Callie, Maggie Beth, David Grant and Coby.