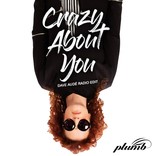 Nashville, TN – Today, PLUMB is releasing a bold new radio single and edit for the fan-favorite Crazy About You, through a partnership with Centricity Records. The song is the second single off the newly released BEAUTIFULLY BROKEN album and will be followed in the coming weeks with a new concept music video and multi-format radio promotion.

The single is a collaboration with PLUMB and acclaimed Grammy-winning producer Dave Audé, Audé holds the distinct honor of accumulating more #1 records than any other producer on the Billboard Dance Chart. The Crazy About You single was written by Plumb and Eric Marshall, frontman of The Last Royals and Young Oceans.

The song shares the empowering message of the unconditional love of God. When asked about the song, PLUMB explains, “Crazy About You is both a love song and a song of hope…for anyone that’s been to the bottom and wondered if there’s anything or anyone left to live for.”

Crazy About You launches as PLUMB prepares to kick off her BEAUTIFULLY BROKEN tour. Presented by World Vision, the tour hits select cities throughout the Midwest and features special guests Jason Gray and Eric Marshall. Following the BEAUTIFULLY BROKEN tour, PLUMB is honored to perform on Compassion LIVE’s The Roadshow Christmas Tour, with Matthew West, Matt Maher, Building 429, Josh Wilson and Leanna Crawford.

About PLUMB:
Throughout her two-decade career, Plumb has been a constant, powerful voice in the Christian, pop and EMD worlds. An accomplished songwriter, Plumb’s music has been featured with dozens of TV and movie placements, as well as being recorded and performed by numerous other artists. After leaving the label system to fully be in control of her career, her album BEAUTIFULLY BROKEN released June 22, 2018, in partnership with Centricity Music. The 11-track album showcases a powerful theme of releasing shame and trusting God’s love, amidst our flaws and insecurities. In fall of 2018, she also debuted her second book, FIGHT FOR HER…Even If You Have to Fight Her, a follow up to her prolific memoir NEED YOU NOW: A Story of Hope. http://www.plumbmusic.net

About The Last Royals:
The Last Royals (Brooklyn, NY) is the alternative indie-pop project off Eric James a.k.a. songwriter Eric Marshall, whose breakout single “Crystal Vases” first dominated Sirius XM’s AltNation radio in 2012.  Presented as a two-piece band, The Last Royals features Marshall and friends playing numerous festivals (Firefly Festival, Summerfest) and tours (Sir Sly, The Hush Sound) in support of debut album ’Twistification’. In addition to the follow-up LP ‘Never Be Alone’, Marshall has recently developed and toured the side project Young Oceans while also writing/producing for a growing number of artists from his Nashville studio.