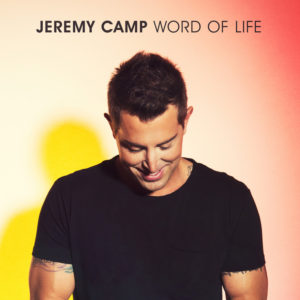 16 June 2017 – Nashville, Tenn – Multi-award winning artist and songwriter Jeremy Camp has announced his latest single debuts today. The poignant song, “Word Of Life,” can be found at all digital formats by clicking here and will go for adds at radio next week on June 23. “Word Of Life” is the first single from Camp’s upcoming album slated for release this fall.

In Camp’s words, this song shares about God’s never-ending love for us. “He offers peace, hope, joy…He offers the words of eternal life,” Camp exclaims. “I want to encourage you to stick to the only true source of life and that’s Jesus, because He gives us all that we need.”

Be sure to check out exclusive video below to find out more about “Word Of Life.”

Video: about the song “Word Of Life”

“Word Of Life” is one of the many singles Jeremy Camp has had at radio in his stellar 15-year career. According to Billboard, he has the most No. 1 songs among solo artists on Billboard’s Christian Airplay chart, and all three of the singles from his latest album, I Will Follow, went No. 1.

ON TOUR: Jeremy Camp continues to tour throughout the year. This July he is on the road with the Summer Lights Tour joining MercyMe and Natalie Grant, and will then embark on numerous festivals and other one-off dates around the U.S. For the most updated tour schedule visit his tour page.

ABOUT JEREMY CAMP: Throughout his 15-year career, Capitol CMG artist Jeremy Camp has established himself with landmark accolades. He has sold 4.3 million albums including four RIAA Gold-certified albums, a RIAA Multi-Platinum long-form video and a Gold-certified digital single (“There Will Be A Day”). At radio, Camp is recognized as a staple artist with 38 No. 1 radio hits across all formats spending more than 175 weeks at No. 1 at radio in his career.

Adding author to his name, Camp penned his first book and autobiography, I Still Believe, in 2013 (Tyndale). In 2013, Jeremy founded Speaking Louder Ministries, which provides free crusade-style events and comes alongside local churches or missionaries in the countries where the Gospel needs to be heard. Locations of Speaking Louder Ministries’ trips so far include Ukraine, Japan, India, Uganda, Guatemala and Kyrgyzstan.