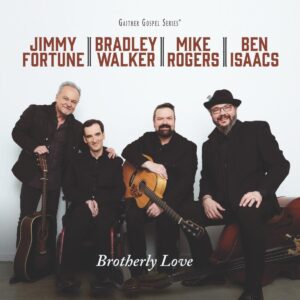 NASHVILLE, Tenn.–May 28, 2020–Gaither Music Group is thrilled to announce a new recording combining four of the most talented and renowned country, bluegrass and gospel artists–award-winning singers who just happen to be good friends with gospel music legend Bill Gaither. Brotherly Love, an audio recording featuring Jimmy Fortune, Bradley Walker, Mike Rogers and Ben Isaacs, will release globally on May 29, followed by a DVD release and TV special later this year.

Each member brings their own wealth of experience to Brotherly Love, creating an intriguing combination of styles and influences. The result is a diverse collection that spotlights some of the best-loved gems on America’s musical landscape. Walker takes lead on the mournful Hank Williams Sr. classic “I’m So Lonesome I Could Cry.” Fortune’s pristine tenor shines on the Vince Gill hit “Go Rest High on That Mountain.” Rogers delivers a spirited take on the O Brother, Where Art Thou hit “Man of Constant Sorrow”; and Isaacs’ warm voice revives the Don Williams’ hit “Lord, I Hope This Day Is Good.”

An acclaimed producer who has shepherded many of the top names in the industry, Isaacs produced Brotherly Love. “It was, ‘Here’s our favorite songs,’ and it was more about whatever song fit the personality,” recalled Isaacs. “For me, it was a given that Jimmy sing ‘Go Rest High’ because there’s no one who is going to sing that with more heart than Jimmy Fortune. It was a given that Bradley would sing ‘The Lighthouse’ and that Mike would sing ‘Man of Constant Sorrow.’ He does so good with those energy things.”

Fortune rose to fame as a member of the Statler Brothers and penned some of their biggest hits (“Elizabeth,” “Too Much on My Heart”) before forging a successful solo career when the quartet retired. Walker is a DOVE Award-winning artist with a strong following in country, gospel and bluegrass. Isaacs, a DOVE Award-winning producer, has performed with his mother and sisters for years as the GRAMMY-nominated group The Isaacs. Formerly with the legendary Doyle Lawson & Quicksilver and currently on the road with Craig Morgan, Rogers is one of the most highly respected musicians in bluegrass music.

“When Ben called me and asked what would I think about doing a project like this—and he mentioned all four of us together—who wouldn’t want to do that?” Walker stated with a smile. “I’ve known all these guys through their music careers and been a fan of what they’ve done for many years, so immediately I knew I wanted to be a part of it.”

“Mike and I had sang on Jimmy’s records, and we’ve sang on Bradley’s records; but we were playing downtown [Nashville] and [Gaither Music Group’s] Barry Jennings came and watched us play. He said, ‘This is too good for people not to hear.’ So he asked if we would be willing to do it with Jimmy and Bradley and I said, ‘Absolutely.’ We got together, and when we sang for the first time it was magical. Together the blend and the love we have for each other was so strong that I felt like it had to be shared.”

The four friends shared their close-knit blends with country music singer/songwriter/storyteller Rory Feek, who hosted the LIVE video recording in his concert barn in Tennessee. The upcoming DVD and TV special, Brotherly Love, captures the intimate evening of song and storytelling, filmed in-the-round, that will feature an introduction by Gaither and behind-the-scenes interviews with Feek and the group members, who discuss the music they chose for the performance and share how these songs have touched their lives.

Those songs include the title track, “Brotherly Love,” a country hit for the late Keith Whitley and Earl Thomas Conley; the Statler Brothers’ classic “The Class of ’57”; and Roy Orbison’s “Crying” as well as such gospel standards as “The Lighthouse,” “Daddy Sang Bass” and “Where No One Stands Alone.”

“That night there was so much energy in the room and the crowd was involved. It just felt so good,” said Rogers. “The energy was just so incredible, and to sing on stage in-the-round like we did–it was just amazing. It was one of the coolest, if not the coolest nights, that I’ve ever been a part of ever in my whole time of playing music.”

“If ever we needed brotherly love we sure need it in the world today towards one another,” Fortune said. “We need to look at each other with the love of real brotherhood. We’re all in this together. No matter what our differences are, we have more in common than we think we do, and that is love for one another. That’s what this whole project is all about, and that’s why we wanted to call it Brotherly Love.”

The Brotherly Love audio recording will be available May 29 on Pandora, Apple Music, Spotify, Amazon Music and other online digital platforms. Preview the album here: https://gaithermusic.lnk.to/BrotherlyLove.

The title cut can be found here: https://www.youtube.com/watch?v=NpQK6vzunsA

The physical CD and DVD will be available later this year followed by the TV special set to air on networks including PBS, TBN, RFD-TV, GaitherTV, FamilyNet, CTN, GMC, GMTN, Guardian, Liberty, TCT and TLN. In Canada, Brotherly Love will air on Vision TV, CTS, The Miracle Channel and Hope TV

Lord, I Hope This Day Is Good
Brotherly Love
Where No One Stands Alone
Daddy Sang Bass
Elizabeth
Man of Constant Sorrow
Lighthouse
You’re Only Lonely
I’ll Fly Away
Love Bug
Love Will Keep Us Alive
I’m So Lonesome I Could Cry
Class of ’57
Crying
Go Rest High on That Mountain

About Jimmy Fortune
Country music icon Jimmy Fortune toured, sang and performed with the legendary Statler Brothers for 21 years. Fortune wrote the group’s second No. 1 hit, “Elizabeth,” on their 1983 album, Today, and followed that with two more No. 1 hits–“My Only Love” (from 1984’s Atlanta Blue) and “Too Much on My Heart” (from 1985’s Pardners in Rhyme). Fortune also wrote the Top 10 hit “Forever” from 1986’s Four for the Show and co-wrote the Top 10 hit “More Than a Name on the Wall” from 1988’s The Greatest Hits.

Fortune has performed in every state in the United States, in Canadian Provinces and in front of audiences as large as 100,000. He sang on many of the Statlers’ gold, platinum and double-platinum recordings. Fortune’s career included The Nashville Network’s popular “the Statler Brothers Show,” which aired for seven seasons and debuted in 1991 as the highest-rated show for the network. He was privileged to perform at the White House on two occasions and also presented a special gift to actress Elizabeth Taylor by singing his song “Elizabeth” to her for a birthday celebration.

About Bradley Walker
Known for his unmistakable baritone, Bradley Walker is a storytelling musician. In 2017, the IBMA Male Vocalist of the Year honoree partnered with Rory Feek, his longtime friend, on a gospel music collection that garnered three GMA DOVE Award nominations. That same year, he worked with Isaacs on an album of traditional hymns, earning three more GMA DOVE Award nominations and his first GMA DOVE Award win for Bluegrass/Country/Roots Album of the Year. In 2019, he was featured on Eric Clapton’s Crossroads Guitar Festival where he was accompanied by Vince Gill on guitar.

About Mike Rogers
Mike Rogers may be known around Nashville as a drummer, but he’s also a phenomenal guitar player and singer. He kicked off his Nashville career playing for the likes of country artists Craig Morgan and Kevin Denney as well as bluegrass legend Doyle Lawson. He appears regularly on the Grand Ole Opry, has been featured on Morgan’s tv show and has also gained notoriety for his work behind the scenes, penning songs for Morgan (“Bonfire”) as well as Doyle Lawson & Quicksilver, The Lonesome River Band, as well as for Fortune.

About Ben Isaacs
A 12-time GRAMMY-nominated producer who has produced recordings from some of Nashville’s most-awarded artists, Ben Isaacs is also known as the bass player and vocalist for his award-winning family group The Isaacs, He has been singing all of his life, performing with his sisters, Sonya Isaacs Yeary and Rebecca Isaacs, and mother, Lily, at the Grand Ole Opry, on the Gaither Homecoming video and concert series and at LIVE shows throughout the world each year. The group has performed at CMA Fan Fest and Carnegie Hall and has won seven GMA DOVE Awards, in addition to being featured on recordings by Dolly Parton, Paul Simon, Vince Gill, Merle Haggard, Ralph Stanley, Reba McEntire and many others.

About Rory Feek
Brotherly Love host Rory Feek is a Nashville singer-songwriter, a New York Times best-selling author, filmmaker, and reality show star. As one-half of the country music duo Joey+Rory with his late wife Joey, Feek won GRAMMY Awards and starred in a weekly hit television show on RFD-TV. He authored two books, This Life I Live and a children’s book, The Day God Made You, and is currently starring in a new RFD-TV docu-series, This Life I Live.

About Gaither Music Group
One of the largest independent Christian music companies in the world and a household name for millions of fans, Gaither Music Group, in partnership with Primary Wave Entertainment, is known worldwide for its award-winning and top-selling recordings, including the Gaither Gospel Series, of which 133 products have been certified gold, platinum or multi-platinum. These recordings, which encompass more than 177 video copyrights, showcase gospel music pioneers; many of the finest performers in the gospel genre; up-and-coming acts; and country artists including The Oak Ridge Boys, Jimmy Fortune, Joey+Rory, Alabama, Alan Jackson, The Statler Brothers, George Jones, Vince Gill and others. The brand has partnered with Sandi Patty, Gloria Gaynor, Steven Curtis Chapman and a host of acclaimed talents from various fields of music. Gaither Music Group has garnered sales of more than 40 million DVDs and CDs, including such PBS stalwarts as Billy Graham: God’s Ambassador, the only authorized video autobiography of Reverend Billy Graham; The Gospel Music of Johnny Cash; and three Elvis Presley projects, in conjunction with the Elvis Presley Estate. The company developed a partnership with Cracker Barrel Old Country Store® in 2008, one of the most successful music launches in Cracker Barrel® history; and its alliances with Capitol Christian Music Group, Universal Music Group and Time Life Music remain bedrocks for the company.

Courtesy of The Press House