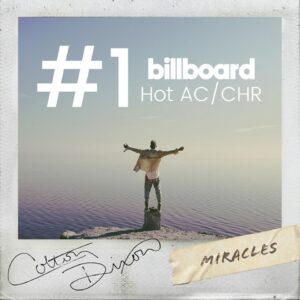 Nashville, TN…. May 28, 2020 – Just as his self-titled EP nears the close of it’s first week of release after hitting top 3 on iTunes Pop Albums Chart, American Idol alum Colton Dixon’s “Miracles” has hit No. 1 on Billboard’s Christian Hot AC/CHR chart. The first single from the EP has been widely praised and noted as “a bombastic, uplifting, humongous pop tune of the kind we’re desperately in need of right now.”

“I’m so grateful to all the stations and listeners for getting this song to number one,” Dixon commented. “What an incredible journey the past few months with this song have been so far. I feel like our country, our world, is in a place where we need hope maybe more than ever. The stories I’ve heard from fans all over about how during this time they’ve been able to see the little things, the little daily miracles God does in a bigger way now, is really why I wrote this song. Each day, even in the midst of hard times, there is always something we can be grateful for.”

Dixon and his wife Annie are expecting their first children in just a few months, twin girls. Also included on COLTON DIXON is the first love song he’s ever written, dedicated to Annie. Atwood Magazine exclusively premiered what they described as an “achingly honest outpouring,” and “a vivid display of love and connection” music video for the song. Referring to the track, Dixon told the outlet, “it feels fitting that this song anchors my new EP release as it shows the journey I’ve not only been on in life, but in music too,” adding “I’m so glad we were able to give everyone a bird’s-eye view of my wife, Annie and I’s journey in the new video. Relationships are a gift. No matter the challenges that life brings, one thing that’s certain for us is that we will never stop choosing to love one another.”