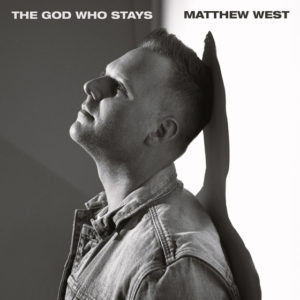 NASHVILLE, TENN. (JULY 26, 2019) In his new joint venture with Provident Label Group/Sony Music and his imprint Story House Music, Matthew West has released a brand new song and music video for “The God Who Stays.” The song is available now on all digital platforms here.

“I am so excited to have a new season of new music ushered in by the first single ‘The God Who Stays,'” shares Matthew West. “It started as an honest, late night conversation with God. I was sitting at the piano in my house playing and singing quietly because my family was all asleep in nearby rooms. Even now that the song has come out of the studio with powerful production and all the bells and whistles, when I listen to it I hear that late night conversation at the piano and remember how God whispered this reminder to me that He’s in it for the long haul. He’s not fed up and He’s not giving up on me. When the whole world walks away, He’s the God who stays. I’ll never let you down, never walk off and leave you (Hebrews 13:5 MSG.)”

The new song’s theme is universal for everyone. West shares that each person will come face to face with the feeling of abandonment on some level.
“Many times we can get discouraged in thinking that perhaps God might get fed up with our imperfect lives and leave us, too. I wrote this song in the hopes that it might be a line by line reminder that no matter who’s walked out on you in your life, no matter who has left you, there is one who never will. The Bible reminds us over and over again that He is not a god who walks away. He’s the God who pursues. He’s not a god who gives up. He’s the God who persists. He’s not a god who changes His mind. He’s the God who has made up His mind about how much He loves us. He is not a god who leaves. He is the God who stays.”
As a storyteller at heart, West wanted to debut the song and music video on the same day to share the story and have it come to life visually. Directed by Patrick Tohill, the concept shows abandonment from various vantage points, but most importantly, it displays God’s faithfulness and His redemptive plan when we turn to him.

West is currently working on more new music that will be released over the coming months. This fall he is partnering with Duck Dynasty’s Willie & Korie Robertson and Winning At Home’s Dan Seaborn for the couples-focused Getaway Night Tour sponsored by Compassion International. Click here for tour dates and ticket information.

ABOUT MATTHEW WEST: Matthew West is a four-time GRAMMY® nominee, a multiple ASCAP Christian Music Songwriter/Artist of the Year winner and Dove Award recipient, and was awarded an American Music Award (2013), a Billboard Music Award (Top Christian Artist, 2014), a K-LOVE Fan Award (2016), and named Billboard’s Hot Christian Songwriter of the Year (2016). A recipient of the Rich Mullins Impact Award, West also received a Primetime Emmy® Award nomination for Original Music & Lyrics for the title track for the feature film “The Heart of Christmas.” He has also been awarded a RIAA Gold certification for his single “Hello, My Name Is” and RIAA Platinum certification for the song “The Motions” as well as sold more than 1.9 million albums to date (TEA).

In addition to his own recording career, he has co-hosted the K-LOVE Fan Awards five times and has more than 130 songwriting credits to his name, including cuts by Rascal Flatts, Scotty McCreery, Michael W. Smith, Amy Grant, Mandisa and others, along with No. 1 songs by Casting Crowns and Danny Gokey.

Adding author to his list of accolades, West has written five books to date: Give This Christmas Away, The Story Of Your Life, Forgiveness, Today Is Day One and his latest, Hello My Name Is. He is also passionate about providing hope and healing through the power of prayer and story. Along with his father, Pastor Joe West, they founded popwe, a non-profit ministry helping others to craft, share, and live a more meaningful life. Please visit popwe.org for more information.