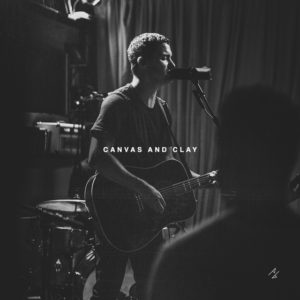 “Canvas and Clay is about trusting the process of formation in our lives,” shares Pat Barrett about the upcoming release and title track. “I love the picture of God being a master artist. It makes verses like in Romans 8 He makes all things work together – so dynamic. He uses every aspect of our lives and He doesn’t do waste. Jesus didn’t invite people into a quick, easy transformation. There are times when it feels like two steps forward and one step back, and it’s in those moments that we get to remember that He is still forming us even today. We get to grow in love, kindness, forgiveness, goodness, self control, and more. I hope that this song helps people along in that journey.”

This live album was captured in Atlanta at 1971 Sounds Studio and became less about making a live album and more about having a night of worship and sharing the songs and moments that happened.

“There is just a really beautiful thing that happens when you experience songs in a live setting,” explains Barrett. “It’s like anything can happen. Some of the songs went longer than we planned and there were spontaneous moments that we felt were important to keep and share. Our relationship with God is such an experiential thing that is filled with the unknown. There are things that we prepare for and things that happen that you could never prepare for. I always love the posture of leading worship that says we have some songs planned, but this isn’t about songs…it’s about us connecting with God…so let’s see what happens. I love that we were able to capture and share a night like that.”

2018 was a breakthrough year for Barrett as a solo artist, who has already celebrated 15 years in his career before releasing a solo project in 2018 on GRAMMY® Award winning artist Chris Tomlin’s imprint record label, Bowyer & Bow. The album’s first single “The Way (New Horizon)” climbed the radio charts into the Top 5 on the Christian Audience radio chart. Barrett was also nominated for the prestigious New Artist of the Year for the 49th GMA Dove Awards. His single “Build My Life” became a No. 1 radio song as well as a Top 10 CCLI song. He also appeared on the “Worship Night in America” tour, Tomlin’s “Good Good Father” tour, “Holy Roar” tour as well as touring internationally in the UK, Singapore and Philippines. This fall, Barrett will be on tour with Chris Tomlin.

ABOUT PAT BARRETT: With popular songs such as “Build My Life” and “Good Good Father,” Pat Barrett is a key songwriter and artist in the broader worship community. Barrett, a worship leader at Grace Midtown in Atlanta, GA and former singer/songwriter with the band Housefires, released his solo debut after a 15 year career in 2018. He was the first signing on Chris Tomlin’s label imprint, Bowyer & Bow, in partnership with Capitol CMG. Barrett also partnered with Tomlin to write the children’s book Good Good Father, which has sold more than 200,000 copies. For more information, please visit PatBarrettMusic.com and on his social links below.