Nashville, Tenn. – (January 4, 2017) – Sidewalk Prophets premiered their latest music video last night for their song “Impossible” with a little help from the Sidewalk Prophets Family, who helped promote the video across hundreds of social network profiles – reaching half a million people – in a coordinated effort. “Impossible,” the third single from Something Different, is currently Top 30 at BDS/Billboard and Mediabase AC-Indicator.

Sidewalk Prophets will be taking their hit music, energetic live performance, and thought-provoking creativity on the road this winter and spring on the 2017 leg of “The Prodigal Tour.” The tour is in partnership with The Mocha Club, a non-profit that the band has passionately supported since visiting the Democratic Republic Of The Congo in 2011 and seeing the organization’s work first-hand in caring for needs of the area.

This second leg of “The Prodigal Tour” comes on the heels of another successful year for the band as their latest album, Something Different, has garnered rave reviews from both fans and critics alike. The album has already notched two radio hits, “Prodigal,” and “To Live Is Christ.”

“The Prodigal Tour” sets itself apart from other tours as the band has created what they are calling a “immersive concert experience.” The centerpiece of this tour is Wander Creative’s suspenseful yet powerful short film, “The Prodigal,” which was written by Sidewalk Prophets co-founder Ben McDonald along with Matt Hadley. 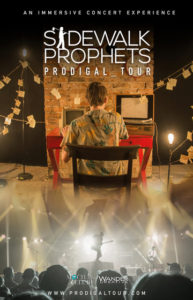 This interactive experience tour also offers unique attention to detail. Audience members will see from the moment they walk in the venue that the entire building has been transformed to take them on a journey, weaving together scenes from the short film with the band’s music. The night culminates in a powerful moment of prayer for the lost.

“The music, the effects, the message….it was so engaging you felt as though you were part of the production. This is a must see for everyone, you will enjoy every second, and wish it would have continued all night.” – Robert Lawson (event attendee)

Not only is the band working hard to deliver a great experience on the tour but they also desire to deliver an affordable experience. Tickets for the tour are offered at different price levels:

$10 General Admission
* your ticket to the show

$25 Early Entry FastPass
* Includes: your ticket to the show, exclusive Early Entry FastPass (gets you in the doors approximately 90 minutes prior to showtime to obtain the best seats), PLUS receive access to join the band for their nightly pre-show devotionals

$100 – VIP After Party FastPass
* Includes: your ticket to the show, a limited edition autographed tour poster, the exclusive Early Entry FastPass and VIP access to join the band for their nightly pre-show devotionals. PLUS, receive exclusive access to the tour’s VIP After Party which includes private hang-time with the band, snacks, and an intimate acoustic mini-concert!

About Sidewalk Prophets: Dove Award-winning Sidewalk Prophets are a band who strive diligently for excellence in all things. Formed on the campus of Anderson University and built around vocal powerhouse and pop culture nerd Dave Frey, the band has: sold over 500,000 albums, 1.5 million digital singles, been nominated for a Billboard Music Award, played over 2,000 shows translating to being in front of 2.5 million fans, garnered five number one singles and eight top five radio hits, received over 11 million YouTube views, and been nominated for four Dove Awards, winning one – all over the course of their three Fervent Records albums. Sidewalk Prophets are a band known for spending the majority of their time on the road where they are passionate about connecting with their audience on a personal level. SidewalkProphets.com.