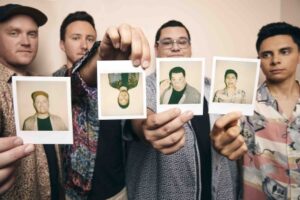 SIDEWALK PROPHETS RELEASE NEW ALBUM, THE THINGS THAT GOT US HERE, TODAY, JULY 3, 2020
Performance From the Historic Ryman Auditorium Scheduled To Livestream on July 9, 2020

“The Things That Got Us Here has taken on new meaning in our lives since the beginning of the year,” shares front man Dave Frey. “The world is faced with so many uncertainties and hardships, and so are each of our hearts. There are so many ‘things’ that have brought us all to this moment of our lives. We hope this album will be used to provide some joy and lasting hope for anyone that listens.” 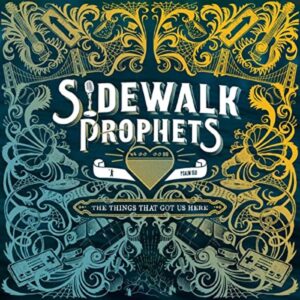 The band will also turn their awaited historic sold-out Ryman Auditorium concert into a livestream-only event. Originally, Sidewalk Prophets invited their “Great Big Family” to experience the gift of an exclusive free album preview and live performance at one of Nashville’s most revered venues, but have made the event livestream-only due to social distancing rules and COVID-19 concerns. Though the plans for a live show have changed, the group is excited to have the opportunity to share this night with even more fans, as the livestream will allow those from all over the world to join in this once-in-a-lifetime experience. The show will stream via Facebook Live on July 9, 2020 at 7 PM CST.

In support of the release of The Things That Got Us Here, the band is in the middle of a “virtual tour.” Pioneering what a virtual livestream event looks like, the show includes 3D elements in which viewers wear 3D glasses, while still enjoying the show without them, and a complete high definition multimedia experience, setting new expectations for live show creativity. Every show is live, giving the same unique show-to-show experience as a live tour would.

The Things That Got Us Here Track Listing:

With a career spanning three major label studio releases—These Simple Truths (2009), Live Like That (2012) and Something Different (2015), plus 2013’s celebrated holiday offering, Merry Christmas To You—and multiple hits, including Gold-certified “The Words I Would Say,” “You Love Me Anyway” and “Live Like That,” among others, Sidewalk Prophets remains a mainstay at Christian radio. The Dove Award-winning band has more than 196 million career on-demand streams, sold more than 875,000 in equivalent album sales, and 1.86 million digital tracks. In addition, the group has garnered five No. 1 songs, nine Top 5 radio singles and more than 45 million views on YouTube. The band originally formed at Indiana’s Anderson University, and since signing with Curb | Word Entertainment, they’ve been nominated for a Billboard Music Award, multiple K-LOVE Fan Awards and four Dove Awards, taking home the New Artist of the Year Dove in 2010. Over the course of their career, they’ve played for more than 2.5 million fans, and counting. Known for spending more days on the road than anywhere else, Sidewalk Prophets’ most recent tours have morphed into interactive experiences for their fans, whom they affectionately call “The Great Big Family.” The band is set to host a livestream event from the historic Ryman Auditorium, sharing new music from The Things That Got Us Here, releasing today.