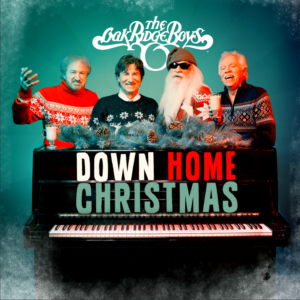 “If the holiday season is all about long-held traditions, then pushing play on an Oak Ridge Boys Christmas album should absolutely be up there with spiking the eggnog, arguing with your crazy uncle and watching “A Christmas Story” for 24 hours straight.”
– Kelly Dearmore, Sounds Like Nashville

“Cobb puts the signature vocal harmonies of the four Oaks out front, a wise approach that works well on ‘Down Home Christmas.’”
– Allan Sculley, TRIB LIVE

“We told songwriter Aaron Raitiere that we needed a fun Santa song, and almost immediately he and Anderson East wrote ‘Don’t Go Pullin’ On Santa Claus Beard,’” said singer, Joe Bonsall. “Aaron wrote or co-wrote six songs on Down Home Christmas and it was like old Nashville again. Writers would bring us a song and we would record it while they wrote another one. It was all magic and our producer Dave Cobb led us all the way! Quality songwriters writing great songs. It was all really fun! This song is now one of the highlights in our Christmas tour.”