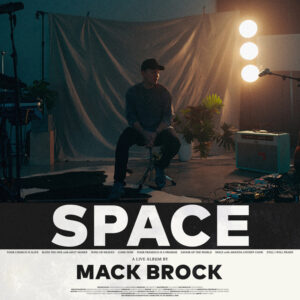 NASHVILLE, TENN (OCTOBER 09, 2020) Worship leader Mack Brock will release his new live album, SPACE (Capitol CMG), on November 20th. In anticipate of the forthcoming project, he is debuting a new single, “Bless The One” with Matt Maher available today. Listeners can pre-order or pre-save the new album here. Along with the song, a live video from the album premieres today – see below.

“There is so much noise in our lives right now. Noise that tells us that we need to do and become more than we are. It is easy to feel left behind, left out, and like there isn’t room for you anywhere. ” states Mack Brock about the inspiration behind this project. “These songs are a reminder that Jesus always creates space for us – no matter our surroundings, past, season, faults or failures. He has room for us to be with Him just as we are. This album is an expression of that interaction with Jesus. It’s creating a safe place for us to engage our heart with His. Whether it’s to worship Him, to speak out loud about His work in our lives or simply acknowledge who He is. My hope is that these songs will help you to enter into a new intimacy with God.”

The album was recorded live in August at Brock’s home base of Charlotte, NC. Originally planned to be recorded with a live audience at his church before the global pandemic, SPACE was taped at a special location called Haven Place, the ministry center for best-selling author and Proverbs 31 Ministries’ founder Lysa TerKeurst.
“I wanted this process to be more than just capturing the songs” shares Brock about the pivot that had to be made when planning the album. “I wanted it to be an experience of worship, to have the people around us that have walked through life with us. The musicians on this album are people that I’ve played with in various seasons of my life. The audio and video crew weren’t just people to get the job done, but people I cared deeply about and that cared about me and my family. We asked a handful of people to come and intercede during the recording and it all resulted in a really powerful day. Even though it wasn’t what we originally planned, it was probably the most special recording I’ve ever done simply because of who was in the room with me and the atmosphere of worship we entered into together.”

“Bless the One” (Official Live Video)

SPACE was co-produced by Aaron Robertson and Brock, and co-songwriters on the album include Phil Wickham, Chris Davenport, Jason Ingram, Matt Maher and more.

“Your Church Is Alive”
“Bless the One” with Matt Maher
“Song of Heaven”
“Come Now”
“Your Presence is a Promise” feat. Mateus Asato
“Savior of the World”
“Space” with Amanda Lindsey Cook
“Still I Will Praise”

ABOUT MACK BROCK:
Mack Brock’s greatest passion is to lead people into a heightened awareness of the presence of God and to see individuals experience the breakthrough God has for them through worship. He has been a worship leader for over 15 years and co-wrote “O Come To The Altar,” “Resurrecting,” “Here As In Heaven,” and “Do It Again”- each have had a significant impact on the church worldwide. Three of his songs have landed in the Top 50 on CCLI, and four in the Top 100 CCLI songs. Mack Brock served as the music producer and a key worship leader with Elevation Worship for a decade, and has led thousands in worship in arenas and auditoriums all across the United States. Mack is married with 2 children and lives in Charlotte, North Carolina.