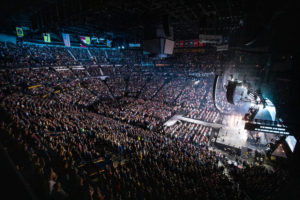 Nashville, TN (April 22, 2019) – Grammy® Award winner Chris Tomlin not only sold out his ‘Good Friday Nashville’ concert days ahead of the show but he also smashed his own previous attendance record as the largest ticketed Christian concert in the history of Nashville’s Bridgestone Arena. Chris has committed to hosting the ‘Good Friday Nashville’ concerts indefinitely and currently has Bridgestone Arena on hold through 2024. Next year’s concert is set for Friday, April 10, 2020. Tickets for the 2020 show are available NOW and half of the tickets have sold already! Go to www.goodfridaynashville.com

“There were so many God moments that came together in this one concert,” shared Chris. “I know it will have ripples far beyond one night. So many put their faith in Chris that night and so many children will find forever families.”

Chris was on stage from beginning to end of the two and a half hour show. The night also included best-selling author Max Lucado, special guests Tauren Wells and Pat Barrett. Lauren Daigle made a surprise appearance to perform her song “You Say” and joined Chris, Tauren and Pat on “Good, Good Father.”

The ‘Good Friday Nashville’ concert proceeds will benefit Tennessee Kids Belong, a statewide nonprofit who help children and families in the foster care system. “Foster family recruitment goals have been far surpassed the last two years,” said Kristin Allender, Executive Director of Tennessee Kids Belong. “Last year the state certified 1,122 new foster families! They have a goal of 960 new families this year, with a special emphasis on the need for teenage placements. It has been beautiful to watch entire communities come around these families and children.”

The inaugural ‘Good Friday Nashville’ event in 2017 was the previous record setting year as it became the largest ticketed Christian concert in the venue’s history at the time. 2018’s show forced open additional seating due to high demand for tickets. To have a lasting impact on Nashville and the state of Tennessee, each year’s concert will give back to the community. ‘Good Friday Nashville’ was produced by Awakening Events and was presented by K-LOVE, Air1, The Fish and WAY-FM. 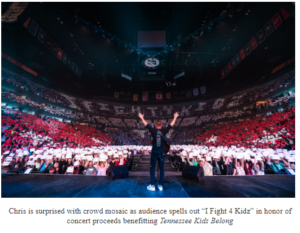 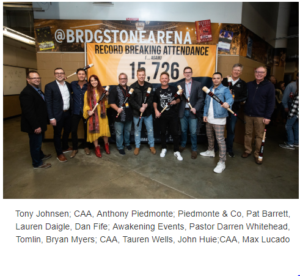 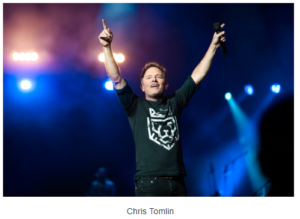 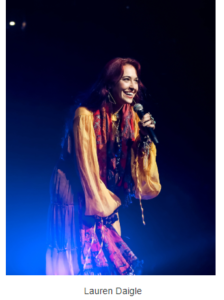 About Chris Tomlin
Chris Tomlin is one of the most heralded singer-songwriters in the world who has amassed an impressive body of work. With 12 albums, 16 #1 radio singles, a Grammy and an American Music Award, 3 Billboard Music Awards, 21 Dove Awards, a BMI Songwriter of the Year Award with two platinum and five gold albums to his credit and over 8 million albums sold, Chris is among the most recognized and influential artists in any genre of music known around the world. It is estimated each week 20-30 million people sing one of his songs in worship and TIME magazine claimed he is the “most often sung artist in the world.” In another career milestone Chris became one of only four artists ever to receive the Sound Exchange Digital Radio Award for over 1 Billion digital radio streams, others include Justin Timberlake, Pitbull and Garth Brooks. Chris’ concert tours have sold-out venues in major cities including New York City’s Madison Square Garden, The Forum in Los Angeles, Nashville’s Bridgestone Arena and Red Rocks in Denver, among others.

In 2018, Chris gathered 175,000 in six-weeks during his spring concert tour, launched an imprint record label Bowyer & Bow, headlined a sold-out Canadian tour in September, was recognized as the first Christian artist to reach the Billion streams threshold on PANDORA and was presented with their BILLIONAIRE award, released a new studio album, HOLY ROAR, wrapped a 12-city Christmas Tour in New York City in December after a run of sold-out shows and performed on Good Morning America.

About Awakening Events
Awakening Events produces over 250 Contemporary Christian concerts and events nationwide in America and is consistently ranked in Pollstar’s “Worldwide – Top 50 Promoter” list each year, reaching as high as 9th in North America, and top 20 in the world. For more info visit: www.AwakeningEvents.com.

About Tennessee Kids Belong
Tennessee Kids Belong is a 501c3 that unites and mobilizes government, business, faith and creative leaders to ensure every child in TN belongs in a forever home- through reunification, or when that is not possible, through adoption. Tennessee Kids Belong runs innovative initiatives to recruit more foster families, as well as wrap-around support for those who have opened their hearts and homes.