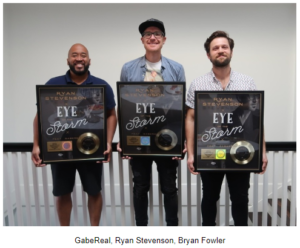 “My heart is full,” shares Ryan Stevenson upon receiving his first artist RIAA Gold single. “I’m thankful for the success and impact of this song, but as I looked around the room last night and into the eyes of everyone who has been on this journey with me, I was reminded that the most important aspect of life are the people we get to live it out with. I consider myself a very blessed guy to be able to say that my team is my family. I am thankful for all of you – you have enriched my life in such a beautiful way. Also a HUGE thanks to all of my radio fam around the country for your support and encouragement.”

“Being a part of this song is one our proudest moments in the 25 year history at the label,” shares Brad Moist, A&R of Gotee Records. “The impact this song has had and is still having is an incredible thing to see. While it still receives airplay every week at Christian radio and more than 750k streams/views a week across just AppleMusic, Pandora, Spotify and YouTube, seeing footage of kids in a school hallway singing it during Hurricane Florence and hearing it being used in VBS curriculum last summer speaks to the longevity and lasting impression this song is having.”

Stevenson joins an elite group of new Christian Contemporary Artists in the last five years, such as Lauren Daigle, Zach Williams, Tauren Wells, Danny Gokey and Jordan Feliz, who have received RIAA Gold Certifications in the past year. His latest single, “With Lifted Hands” became his fourth consecutive Top 10 Billboard Christian Airplay radio single. In May, he released a special acoustic version that features Martin Smith formerly of Delirous? (here).

This year, Stevenson has toured with TobyMac on the Hits Deep Tour and will head out this fall with the Newsboys. He is also now represented by booking agency CAA. Visit his site to see music videos, live performances, podcasts he’s been featured on and current tour dates: https://www.ryanstevensonmusic.com/.

ABOUT RYAN STEVENSON: Following a nine-year stint as a paramedic, Pacific Northwest native Ryan Stevenson signed an exclusive agreement with Gotee Records in 2013 after capturing TobyMac’s attention by co-writing the No. 1 and GRAMMY® nominated single “Speak Life,” His first recording for the label was the Holding Nothing Back EP in 2013. This was followed by 2015’s full-length album Fresh Start, which featured the 14 consecutive weeks No. 1 Billboard radio single “Eye of the Storm” in 2016. Next was the 2018 album No Matter What, which featured collaborations with Bart Millard of MercyMe and Amy Grant. With four No. 1 singles (three as an artist and one as a co-writer), a GRAMMY® nomination, Billboard Music Award nomination, a Dove Award (2017), ASCAP honors and major tour bills with the likes of TobyMac, MercyMe, Newsboys and Matt Maher, among others, Ryan has already distinguished himself as a rare talent whose unique perspective guides his honest lyrics and sonic sensibilities.