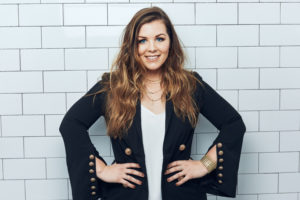 16 August 2019 – Nashville, Tenn – Black River Christian artist/songwriter Hannah Kerr announces the Sept. 13 release of her upcoming EP titled Listen More, while also releasing “Ordinary,” a featured track on the project. Kerr is also set to hit the road this fall on Jordan Feliz’s The Faith Tour, which kicks off Sept. 12.

The six-song project, all co-written by Kerr, has a personal meaning behind each song. “Each song is kind of a window into a different area of my heart or my life,” Kerr shares. “We all are complex people. I’m not just confident Hannah and I’m not just insecure Hannah, but both of those parts of me are coming into this project, and I think that’s exactly how God made me to be.”

With a new confidence in her voice as a result of challenges that she has faced over the last few years, Kerr was forced to assume a new posture when she wrote this album. While her debut album, Overflow, came from a place of letting God pour into her and her heart overflowing in worship, Listen More has come from a quieter place. She explains, “I’m going just sit here for a minute and let God speak to me, and then I’m going to speak from that place of listening, rather than just speaking.”

Kerr is excited to share some of her new songs live when she joins Jordan Feliz’s The Faith Tour with special guests I AM THEY. The tour kicks off in Cleburne, TX on September 12. For all of the tour dates, visit HannahKerrMusic.com.

While she has been an artist and songwriter over the past four years, Kerr has also been a student at Belmont University where this past spring she received a degree in Christian Leadership. “I feel like God really grew me so much as a human being, not just as an artist,” Kerr shares about the past few years. “I understood more about Him, I understood more about myself and went deeper into my faith in a way that I hadn’t before. I feel like I know what I want to sound like, who I am as an artist, and I’m excited to share that with people.” 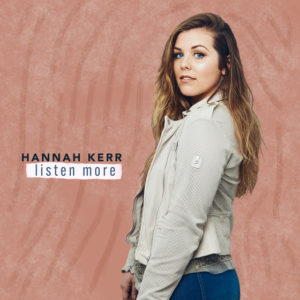 ABOUT HANNAH KERR: Touted as a “compelling” and “encouraging” artist by CCM Magazine, Black River Christian artist/songwriter Hannah Kerr is set to release her upcoming EP Listen More everywhere on Sept. 13. The six-song project, all co-written by Kerr, features the Top 20 radio hit “Split the Sea,”

This fall, Kerr is set to hit the road with Jordan Feliz and I Am They on Feliz’s The Faith Tour. Her debut album, Overflow, has earned more than 20 million streams and features “Warrior” and the Top 5 Hit co-written by Kerr and recorded by Matt Maher, “Your Love Defends Me.” Kerr was awarded a Most Played Song award at the 2018 ASCAP Christian Awards for her co-write with Maher. She has shared the stage with major Christian artists including Casting Crowns, Matt Maher, Building 429, Jonny Diaz, Matt Hammitt, as well as for KING & COUNTRY, Newsboys, and Kari Jobe.

Ker recently graduated from Belmont University with her degree in Christian Leadership. Watch the powerful music video for “Split the Sea” here.