‪The company’s immediate focus will be to continue growing Chapman’s music platform through artist management, brand development and live performances, as well as creating strategic partnerships and branding beyond the music realm. The partners are looking forward to building off of the platform and legacy of Chapman’s massively successful multi-decade career and ministry; concentrating on, and operating under the conviction of the greater things still ahead.

Beyond the immediate focus of Chapman’s brand, The Stable Collective’s future goals include working with both emerging and developed artists, with Chapman overseeing creative artistic direction and songwriting and Mattingly heading up career and business development. 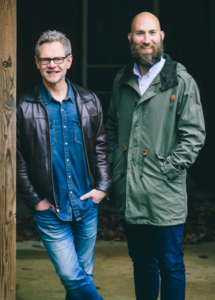 “After 30 years in this space, it’s an exciting thing to be able to bring my years of experience and passion for being a part of creating redemptive and impactful art and join forces with Mark and his expertise in the formation of The Stable Collective,” Steven Curtis Chapman says. “Mark has been a significant part of helping guide my career over the last few years. He’s a very talented, super hard working guy and I’m honored to be partnering with him. We’re excited to explore the new frontiers of music and find fresh ways and means to communicate ageless truth…celebrating and building on the great things that have been accomplished with a firm belief that even greater things are yet to come.”

Mark Mattingly adds, “It’s such an honor to partner with someone who’s not only as accomplished as Steven is, but who’s also one of the most well respected people in our industry. My years of working with Steven have allowed me to see firsthand that everything he does he does with excellence – from perfecting the craft of songwriting, to his ministry and the way he selflessly and tirelessly cares for people, to the wisdom and passion he’s pouring into this new endeavor we’re launching. We could not be more excited to find and create new, innovative ways to continue bringing great art to the world.”

Steven Curtis Chapman is a multi-award winning artist, with five GRAMMY® Awards to his name, 58 Dove Awards, 48 No. 1 radio singles, an American Music Award and more. With more than 11 million albums sold, this year he celebrates 30 years since the release of his first album. His memoir, Between Heaven & the Real World, releases March 7, 2017 with Revell, a division of Baker Publishing.

Mark Mattingly’s career background boasts a multi-faceted music business resume, including starting a record label, experience as a talent agent and, most recently, in artist management.