Tour News: Kim Walker-Smith ON MY SIDE TOUR with Special Guests Urban Rescue 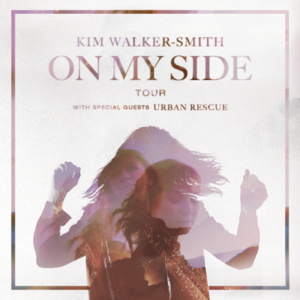 Nashville, Tenn. (Apr. 17, 2018) – With fresh focus and renewed purpose Jesus Culture’s Kim Walker-Smith is heading out on a summertime On My Side Tour with special guests Urban Rescue. Last fall, following the release of her latest solo album On My Side, Kim Walker-Smith toured a dozen cities and brought a message of hope and healing to all those in attendance. On Friday, April 6, she released an EP of live recordings from the fall tour, featuring a select group of songs from the album. Today she is announcing her 2018 tour by the same name.

“I am so excited for this summer! On the first run of the On My Side Tour, it was incredible to see how God met us each night,” said Walker-Smith. “God brought a lot of healing and restoration to many people’s hearts through powerful worship and intimate moments with Him. I’m so excited for this next run and I know it will be a powerful night of worship and testimony!”

Promoted and produced by Premier Productions, the Kim Walker-Smith On My Side Tour will alight on popular East Coast venues and markets such as Jannus Live in St. Petersburg, FL, House of Blues in Orlando, FL, Buckhead Theatre in Atlanta, GA, Fillmore Silver Spring in Washington, DC, Newport Music Hall in Columbus, OH, and Rocketown in Nashville, TN. She is also planning to visit a few megachurches such as City Church in Chattanooga, TN, Raleigh First Assembly in Raleigh, NC and Crossroads Community Church in Kokomo, IN. More summertime tour dates will be announced soon.

Regarded as one of Christian music’s top female worship leaders, Kim Walker-Smith is one of the founding leaders of the Jesus Culture movement. For 17-plus years she has travelled the world leading worship events, sharing her story at conferences and recording many live albums with Jesus Culture, including Love Has a Name (2017) and such well-known worship anthems as “How He Loves,” “Spirit Break Out,” and “In the River.”

Tickets for the On My Side tour go on sale to the general public Monday, April 23. For a complete list of dates, ticketing and details, www.premierproductions.com or https://jesusculture.com/artists/kim-walker-smith/.

About Kim Walker-Smith:
Kim Walker-Smith has become one of the strongest voices in worship music as a passionate worship leader bringing an entire generation into an encounter with God. Her heart is to see people transformed by experiencing God’s love and for this generation to see themselves the way God sees them. Kim has been a part of Jesus Culture since the beginning of the ministry. She carries a genuine heart to see worship change the course of lives and nations. Kim is married and she and her husband have three children.