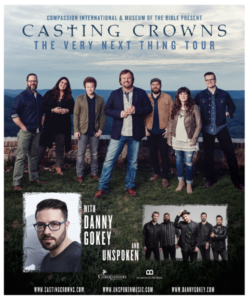 MULTI-PLATINUM, GRAMMY-WINNING CASTING CROWNS ANNOUNCES SPRING LEG OF “THE VERY NEXT THING” TOUR  WITH SPECIAL GUESTS DANNY GOKEY AND UNSPOKEN
Following Successful Fall Run, Tour Will Hit Another 40+ Cities This Spring,    Presented By Compassion International and Museum Of The Bible
Tickets On Sale In Most Markets Dec. 9

NASHVILLE, Tenn. (Nov. 17, 2016) – Multi-platinum selling and GRAMMY® winning group Casting Crowns will hit the road again this spring for the second leg of “The Very Next Thing” Tour, featuring K-LOVE Radio’s Male Artist of the Year Danny Gokey and special guests Unspoken. Presented by Compassion International and Museum of the Bible, the 40-city arena tour kicks off Feb. 16, in Baltimore and will make stops in markets like Philadelphia, Milwaukee, Chicago, New York, Pittsburgh, Raleigh, Orlando, Tampa, Grand Rapids, Minneapolis, Houston, and many more before wrapping up in San Antonio on May 7.

Casting Crowns began in, serves in and continues to be rooted in the local church. It is at the local level that they are walking along with people in ministry and where the inspiration for albums are formed.

“Because we have the honor of walking with people in our churches, we get to see what people are going through – the issues that are impacting everyone now,” shares front man Mark Hall. “It is in these situations that ideas are born for what we all need to hear right here right now.”

The Very Next Thing is full of intimate songs as well as upbeat, fresh sounding tracks that will meet the listener with lyrics that impact with a strong message song after song.

Hall shares the inspiration behind the new album and title. “We are all in different stages of ‘next.’ There’s a next step from where you are right now. We all feel like there’s a stage that we have to reach to move on to what is next – but God has you right here right now for your ‘next,’ and all of these songs touch on that idea.”

Casting Crowns continues to impact audiences with their powerful lyrics and live show as they have performed for more than six million fans. In addition, more than 85,000 child sponsorships have resulted through Casting Crowns’ live shows. For more information on “The Very Next Thing” Tour, visit www.CastingCrowns.com.

ABOUT DANNY GOKEY: Six-time Dove Award Nominee and BMG recording artist Danny Gokey now claims the recent honor of being named Male Artist of the Year at the 2016 K-LOVE Fan Awards, where he also took home the award for Breakout Single for his current #1 hit “Tell Your Heart To Beat Again.” Gokey became a favorite of millions of fans as a Top 3 finalist on Season 8 of “American Idol,” which propelled his career and earned him three chart-topping albums (My Best Days, Hope In Front of Me and Christmas Is Here) and a Barnes & Noble Top 5 autobiography (Hope In Front of Me). Gokey’s “American Idol” success also helped provide a platform for him to launch Sophia’s Heart, an organization founded to carry on the legacy of giving started by his late wife, who passed away during a routine heart surgery in 2008. Now remarried, Gokey and his wife Leyicet have a beautiful son and daughter, Daniel Emanuel (age 4) and Victoria Isabella (18 months). For more information, visit www.DannyGokey.com.

ABOUSPT UNOKEN: Unspoken released their new album, Follow Through, in Aug. 2016 and the project debuted at No. 7 on Billboard’s Christian Albums chart, the highest debut of the band’s career. The first single from the record, “Higher,” has already reached Top 20 on Billboard’s National Audience chart and is still rapidly climbing. Unspoken’s previous self-titled album released in 2014 and included the band’s first No. 1 song at AC Christian radio, “Start A Fire,” as well as “Call It Grace,” the group’s first K-LOVE Fan Awards nomination for Breakout Single of the Year. For more information, please visit UnspokenMusic.com.

ABOUT COMPASSION INTERNATIONAL:  Compassion International is the world’s leading authority in holistic child development through sponsorship. It is the only child sponsorship program to be validated through independent, empirical research. Compassion revolutionized the fight against global poverty by working exclusively with the Church to release children from poverty so that they may become responsible, fulfilled Christian adults. Compassion partners with more than 6,800 Christian churches in 26 countries to release over 1.7 million babies, children and young adults from poverty in Jesus’ name. Compassion has been awarded the highest rating for financial stewardship and transparency for 14 consecutive years by Charity Navigator, America’s largest charity evaluator. For more information on the ministry, visit compassion.com or follow them on twitter at @compassion.

ABOUT M– USEUM OF THE BIBLE: In 2017, the museum will open its 430,000-square-foot nonprofit museum just two blocks from the National Mall.  This museum will showcase an unparalleled collection of antiquities representing 3,000 years of history and provide visitors with an immersive and personalized experience to deepen their understanding of the historical magnitude of the Bible and its impact on the world around us. As of 2015, the museum’s traveling exhibits have visited six U.S. cities and four other countries including Vatican City, Jerusalem, Israel and Havana, Cuba.  New exhibits and locations are continually being planned. The museum also supports research and education through the Museum of the Bible Scholars Initiative, the development of a Bible curriculum for students around the globe, and other programs such as archaeological digs and educational travel opportunities for both students and adults.