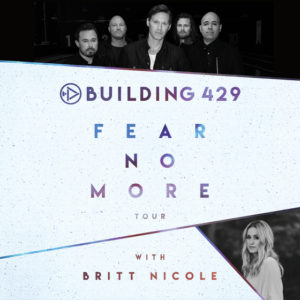 Nashville, Tenn. (Aug. 2, 2019) – Building 429 will embark on the “Fear No More Tour” this fall. Supporting the tour will be pop songstress and fellow GRAMMY® nominee Britt Nicole. The tour announcement comes on the heels of an exclusive touring partnership announcement uniting the GMA Dove Award-winning band with the largest producer of live Christian events, Premier Productions. Tickets go on sale on Tuesday, August 6 at PremierProductions.com.

“The past several months have been incredible for us,” shares Building 429. “We know no other way to celebrate the success of our song ‘Fear No More’ than to partner with Premier Productions and our friend Britt Nicole to take the live experience to our fans on the road!!”

“Fear No More” stems from the GRAMMY® nominated band’s latest single which debuted to record setting adds at Christian radio. The hit song continues to climb the chart, currently No. 5 at AC Indicator, No. 11 at Christian Airplay and No. 20 at AC Monitored.

About Building 429:
Since the release of its debut album in 2004, Building 429 has garnered widespread popular and critical acclaim, receiving numerous accolades all while delivering lyrically-driven, anthemic hit songs with a consistent message of hope along with high-energy concerts in sold-out venues internationally. The band received a 2013 GRAMMY® nomination for Best Contemporary Christian Music Album for We Won’t Be Shaken, which debuted at No.1 on Billboard’s Christian Albums chart and launched the title track to No. 1 at radio. Building 429 also received a 2014 and multiple 2012 “Song of the Year” Billboard Music Awards for “We Won’t Be Shaken” and “Where I Belong” respectively, two BMI “Song of the Year” Awards (“Where I Belong” in 2013 and “Glory Defined” in 2005), a 2014 “Group of the Year” KLOVE Fan Award nomination and a “Best New Artist” GMA Dove Award in 2005. RIAA-certified gold single, “Where I Belong,” further became one of the longest running Christian No. 1’s in Billboard’s history at 15-weeks and has well over 246-million accumulative audience impressions. The band is also endorsed by Fender Guitars, Gibson Guitars, PRS Guitars, Orange Amps, Ampeg Amps, DW Drums, Guitar Center and many others.

About Premier Productions:
Pollstar Magazine ranks Premier Productions as the largest producer of live Christian events both nationally and internationally. Over 18 million people have attended a Premier event in over 4,000 concerts worldwide. Premier promotes tours for Hillsong UNITED, Hillsong Worship, Young & Free, Kari Jobe, Jesus Culture, Lauren Daigle, Gaither Homecoming, Sadie Robertson, The Newsboys, comedian John Crist, Rend Collective, as well as their annual Winter Jam Tour Spectacular and OUTCRY Tours. Premier Festivals promotes 10 of the largest Christian Festivals in the U.S., and over 80,000 Passengers have sailed with them through their Cruise Company.