TOUR NEWS: Sadie Roberton Takes Her Message On The Road With THE LIVE ORIGINAL 2016 TOUR

Home/News/TOUR NEWS: Sadie Roberton Takes Her Message On The Road With THE LIVE ORIGINAL 2016 TOUR
Previous Next

TOUR NEWS: Sadie Roberton Takes Her Message On The Road With THE LIVE ORIGINAL 2016 TOUR 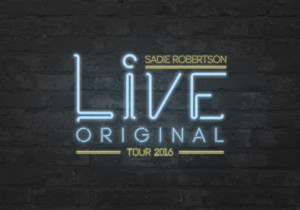 New York Times Best-Selling Author and television star Sadie Robertson and her ‘squad’ take
The Live Original 2016 Tour on the road this September-October for 17 inspirational nights of
MOTIVATIONAL MESSAGES, LIVE MUSIC, INTERACTIVE SESSIONS and more
Tickets on sale Monday, May 9

NASHVILLE, Tenn. (April 26, 2016) – Sadie Robertson’s ultimate goal is not only to inspire her peers, but to also inspire a nationwide movement encouraging her generation to live authentically and stay true to who they are. The A&E Duck Dynasty sweetheart and New York Times best-selling author announced via Facebook Live yesterday that she is taking her message on the road, along with a few family and friends, to tour through 17 cities starting on September 22. The Live Original Tour 2016 is a high-energy night packed full of dynamic messages from Sadie and friends, featuring special moments woven throughout the night to encourage and motivate attendees to Live Original. Throughout the three-hour event, Sadie’s vision and message will be delivered in ways that keep the audience on an emotional journey on what it means to be yourself.  Produced by 25 Entertainment in conjunction with Sadie’s passion and vision, this event is sure to change lives and equip people from all walks of life to Live Original.

“I am so excited to finally announce the Live Original Tour!” shares Sadie Robertson, “We have such a solid group. I know that it’s going to be absolutely life changing, not just for those attending but also for all of us involved.”

Joining Sadie for The Live Original 2016 Tour will be a few of her family members, including her brother John Luke and his wife Mary Kate Robertson, along with their cousins Reed and Cole Robertson. Completing Sadie’s ‘squad’ will be Reed’s fiancée Brighton Thompson and filmmaker Max Zoghbi and his wife Bonnie Kate, who hold a unique and inspirational tale of their faith through suffering as a victim of “The Dark Knight” shooting in Colorado in 2012. The close-knit group will share their hearts, taking attendees on a journey of inspirational messages, dramatic onstage performances, Q&As, and one surprise after another. The night also includes the award-winning rock group, Family Force 5, and worship led by husband and wife duo Love & The Outcome.

The squad announced their participation in the tour over their socials beginning at 5 p.m. CT yesterday afternoon, and ended with a special Q&A via Facebook Live with Sadie herself. “So excited to be taking #liveoriginal out on the road!” she posted to her followers, “I’ve talked so much about this and I couldn’t be more honored to get to share my heart with you all.”

Sadie Robertson hosted her first large-scale event last summer in Nashville, Tenn., where she delivered an inspirational three-hour performance alongside several family members and friends to a sold-out crowd of more than 4,000 people at Lipscomb University’s Allen Arena.

“God has blown me away a lot of times in my life,” she posted to her 2.2 million followers on Instagram after her Live Original event in Nashville, “But tonight He went above and beyond. I pray this is just the beginning of a movement for the people in this world to start living original!”

Tickets for The Live Original 2016 Tour will go on sale to the public on Monday, May 9 at 10 a.m. CT. For more information, visit www.LiveOriginal.com. And to learn more about the Robertsons, visit www.DuckCommander.com.

About Sadie Robertson:
Sadie Robertson is well known for her dimples and engaging smile, but there is more to the 18-year-old charmer and star of A&E’s Duck Dynasty than that. She’s a high school athlete, motivational speaker, and was the first runner up on ABC’s Dancing With the Stars Season 19.  Sadie’s also ventured into acting with roles in “God’s Not Dead 2” and “I’m Not Ashamed,” and will be launching her Live Original Tour this fall, where she will continue to spread her message to her peers about being confident in who God made them to be. Sadie embodies the creative and entrepreneurial spirit of the Robertson family and has carried her philosophy into multiple business ventures, including a prom dress line with Sherri Hill, school supplies for DaySpring, jewelry and home goods with Glory Haus, and a fashion line with Wild Blue Denim that can be found in Rue 21 stores around the country.  Sadie has spent time traveling the world serving those in need. She has also partnered with Roma Boots and worked alongside them in their mission to “give poverty the boot” Sadie’s New York Times best-selling book, Live Original: How the Duck Commander Teen Keeps It Real and Stays True to Her Values is available at retailers nationwide.