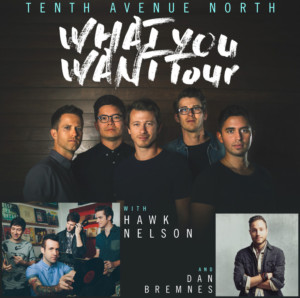 NASHVILLE, TENN. (JULY 29, 2016) – Multiple Dove award-winning band Tenth Avenue North announces the “What You Want” tour with special guests Hawk Nelson and Dan Bremnes. The 15-city tour will kick off on October 6 in Lenoir, NC and conclude on November 5 in Farmington, MO. This tour will be the initial run supporting the band’s forthcoming album, Followers, set to release October 14.

“In the time when we obsessed over leadership legacy and leaving our mark, I decided that what Jesus said is better- Seek first the kingdom of God and his righteousness, and all these things will be added to you. I’ve realized that I’ve been too worried about what I’m going to do for Jesus instead of just following where Jesus leads me to go,” shares front man Mike Donehey about the heart behind the new album and tour. “What if I didn’t need to be a leader? What if all Jesus was asking me to be was a follower? I have a feeling that all the weights would come off, the pressure would stop and maybe just maybe I could finally learn to live from the place of rest. So let’s follow Him – lets follow Him in the joy, in the peace, and wherever the wild heart of God leads us to go – let’s be followers.”

The “What You Want” tour marks the second leg the band has teamed up with Hawk Nelson on the road. The title for the upcoming tour is from the current radio single from the new album. You can watch the lyric video below that was produced by Hawk Nelson’s frontman Jon Steingard.

Donehey, drummer Jason Jamison, bassist Ruben Juarez, keyboardist Brendon Shirley and guitarist Jeff Owen have forged a unique sound that has made them one of the Christian music’s most successful young bands. Tenth Avenue North has crossed the one million mark for records sold and continues to build its strong fan base by achieving more than one million likes on Facebook.

For the most recent tour information, please click here and dates are listed below.

ABOUT TENTH AVENUE NORTH: Tenth Avenue North (Reunion Records) made their national debut in 2008 with Over and Underneath, which spawned the hits “Love is Here,” “By Your Side” and “Hold My Heart.” Tenth Avenue North won the Gospel Music Association Dove Award in 2009 for New Artist of the Year and in 2010 “By Your Side” was named Song of the Year.  The band gained further momentum with 2010’s The Light Meets the Dark and The Struggle in 2012, which continued to populate radio and the church with such memorable songs as “Healing Begins,” “You Are More,” “Losing” and “Worn.” In November 2014, the band released their fourth studio project, Cathedrals, with the first radio single “No Man Is An Island.”

ABOUT HAWK NELSON: This powerhouse, pop rock band has won the hearts of thousands since its debut release in 2004. Hawk Nelson (Fair Trade Services) has released seven studio projects (Letters to the President, Smile It’s the End of the World, Hawk Nelson is My Friend, Live Life Loud, Crazy Love, Made and Diamonds). Their most recent release, Diamonds, produced the No. 1 radio single with “Drops In The Ocean,” where it spent nine weeks at the top of Billboard’s Christian AC Indicator chart. Hawk Nelson has been awarded two Canadian GMA awards, multiple GMA Dove Award nominations as well as a JUNO nomination. The band’s music has been featured on NBC, MTV, WB, WGN, KTLA, Nickelodeon and the NFL Network. Their music has been used with special promotions for American Idol, the NFL, Nike, JCPenny’s, Olympics, NHL and Michelle Obama’s “Big Day Out” 2011 campaign.

ABOUT DAN BREMNES: When this singer and songwriter from Salmon Arm, British Columbia was just ten years old, he played drums at his local church while also learning guitar and discovering a passion for songwriting. As years passed it was a six-month missions trip in Australia with Youth With a Mission (YWAM) that re-shaped his perspective. As he was pursuing his professional dreams, Bremnes’ faced the tragic news that his mother was killed in a car accident. An event that truly turned his life upside down, there was no better way to honor his mother’s memory than by throwing himself wholeheartedly into music. In his career to date, Bremnes has collected a host of awards and accolades as well as No. 1’s in Canada, eventually attracting the attention of Nashville’s Capitol Christian label.

“What You Want” Tour Dates