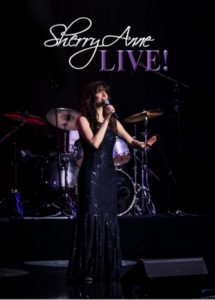 Gospel artist Sherry Anne has inspired many with her testimony and talent. Born hearing and speech impaired, issues that were not even discovered until she reached kindergarten, Sherry Anne has overcome these obstacles and the trials that she experienced as a result choosing to use her God-given gifts and heart for sharing the Gospel to reach people who need to find their faith. Recorded in front of a live audience, the concert DVD, Sherry Anne Live!, features 14 performances where Sherry Anne is joined on stage by Michael Booth of renowned Gospel group Booth Brothers, Landy Ewing, Andrew Ishee, Scott Neubert and Toni Jolene Clay for night of spirit-filled worship.

Sherry Anne opens the concert with “God Made A Way” giving praise to the Lord for His grace, mercy and faithfulness while recognizing the redeeming power of the death & resurrection of Jesus through which we have forgiveness & freedom from sin when we believe.

“I Can’t Even Walk” notes our dependence on our Savior. More often than not, when we try to do things on our own, they don’t turn out very well. It is when we place our trust in Jesus and give up control that we are able to journey through the highs & lows of this life.

While Michael Booth is on stage for the entire concert playing drums, he steps away from the drum kit to perform the Booth Brothers song, “He Heals”, while Sherry Anne signs the words giving the message of God’s healing power an even more emotional impact.

“Silent Prayer” stands out as it reminds us that even when we are unable to speak our prayers to our Heavenly Father in words, He hears our thoughts and knows the longings, pain and cries of our hearts.

Throughout the concert performance, Sherry Anne intertwines passages of Scripture, her testimony and encouraging words between both original & classic gospel songs. Also included are some beloved Christmas songs that are a welcome addition. If you are unfamiliar with Sherry Anne as an artist, this DVD, also available on CD, is the perfect introduction to her music as well as a useful way to share the life-changing message of the Gospel with others. As a whole, Sherry Anne Live! is well produced and allows Sherry Anne’s talent to shine while the words & music prompt viewers to focus on what God wants to say to their hearts. Special features give us a glimpse behind the scenes of how the DVD filming came together and official music videos for her songs “Silent Prayer”, “You Came”, “Singing This Song To You” and “I Only Know To Pray”.

Songs featured:
God Made A Way
Who Do You Say I Am?
I Go To The Rock
Sky Full Of Angels
I Can’t Even Walk
God On The Mountain
Where Would I Be
Lord I Hope This Day Is Good
He Heals (feat. Michael Booth)
Silent Prayer
Do You Hear What I Hear
Labor Of Love
Mary Did You Know?
Jesus, What A Wonderful Child

Watch a preview for the DVD here: