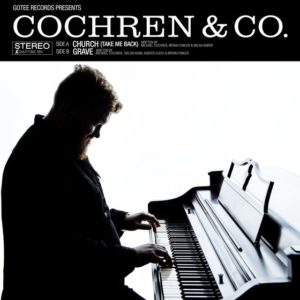 NASHVILLE, TENN. (NOVEMBER 01, 2018) Gotee Records announces the newest member, Cochren & Co., to their elite family. The singer/songwriter and piano player Michael Cochren hails from Montgomery, IN and is releasing his label debut two-song single today. It features the songs, “Church (Take Me Back)” and “Grave.” Get introduced to Cochren & Co. with the lyric video for “Church (Take Me Back)” below.

As a worship leader at his hometown church, Cochren’s piano based soulful pop sound has been influenced by artists such as Billy Joel, Needtobreathe and Ray Charles. After signing with First Company Management (Newsboys, Ryan Stevenson), Cochren’s music was sent to Gotee Records’ CEO Toby McKeehan.

“The soulfulness this man exudes brings pleasure to my ears as well as my heart,” shares Toby. “His passion for the church is so refreshing and real. Michael is a true songwriter because he puts words to my own feelings and his voice takes us places we all want to go!”

“This is a really exciting step for me!” says Cochren. “I’m a big Christian music fan, and I’ve personally experienced the way God uses truth in music to draw a person to himself. That’s why it’s such a dream come true to be able to make music that can impact hearts and encourage the church. Gotee Records and TobyMac have such a successful track record of putting out great music, so I’m truly honored to partner with them for the future!”

“My goal for ‘Church (Take Me Back)’ from the start is that it would stir peoples’ affections for the church and the local expression of it,” says Cochren. “Today it’s pretty vogue for Christians to distance themselves from church in order to be relevant, but the church is God’s design to spread truth and love. We should be lifting ‘Her’ up and talking about how beautiful it is when the ‘church’ is being the church.”

Fans will get the opportunity to hear Cochren & Co. live this month on TobyMac & Diverse City Theatre Tour with labelmate Ryan Stevenson.