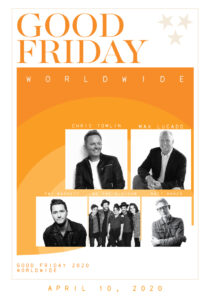 NASHVILLE, Tenn. – (April 7, 2020) – Starting in 1999 in Woodlands, TX Chris Tomlin, a Grammy award winning Christian recording artist, has had a passion and calling to unite people in worship on Good Friday in multiple cities across the country. After his annual Good Friday Nashville concert was forced to postpone until 2021 due to the COVID-19 pandemic, Chris was committed to find a way to maintain the tradition of bringing people together to worship. In light of the inability to gather together physically, Chris called his friends to help and to partner together for GOOD FRIDAY – WORLDWIDE. The television network TBN and radio stations like K-LOVE and Air1 offered their support to bring the world together during this time. The one-hour music special will air on Friday, April 10 at 8/7PM Central and features Chris leading in worship, a message from Max Lucado with guest appearances by Pat Barrett, We The Kingdom and Matt Maher. 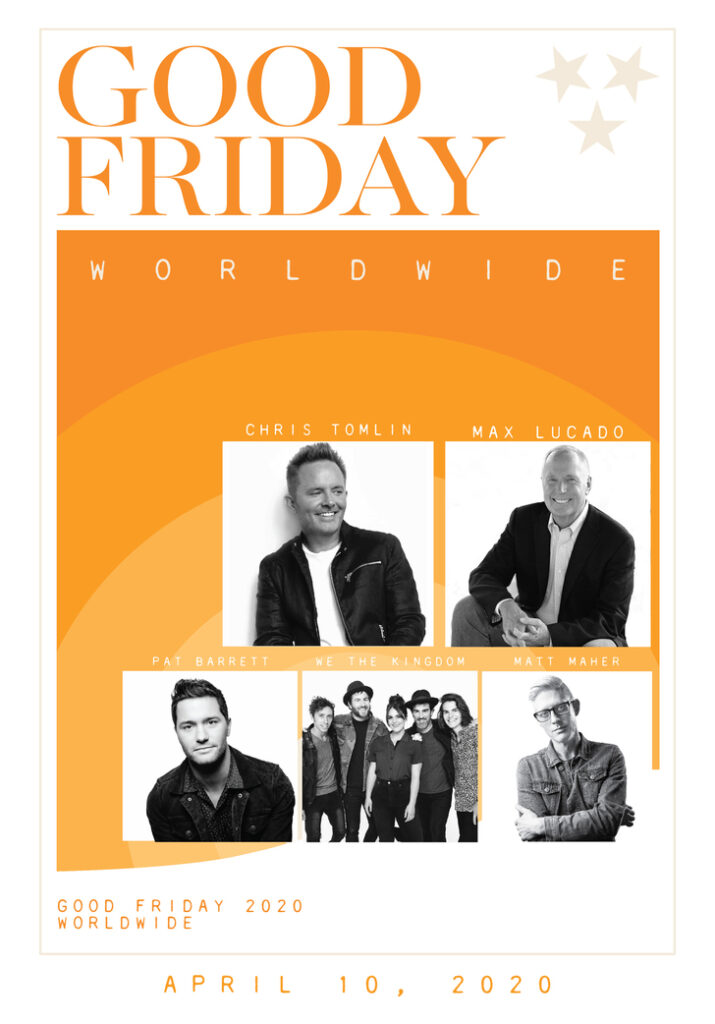 “This is a moment aligned by God to touch millions of lives,” said Chris. “What was originally thought of to be ‘Good Friday Nashville’ in an arena of maybe 16,000 is now going to be a night of worship with millions on a global scale. While we can’t be together physically for the safety of our families and of the world, we can worship together in our homes. This is a unique moment in time and may be one of the most powerful Easter weekends we will ever experience in our lifetime.”

Hear Max talk about this time of crisis and his hope for Good Friday Worldwide HERE.

GOOD FRIDAY – WORLDWIDE with Chris Tomlin and Max Lucado will simulcast with radio partners K-LOVE, and Air1 as well as over 30 additional stations across the country. The television broadcast alone will be seen and heard in over 32 countries.

The live special was filmed last month at the TBN studios outside Nashville under the guidance of local health officials and safety protocols determined by the CDC.

About Chris Tomlin
Chris Tomlin is one of the most heralded singer-songwriters in the world who has amassed an impressive body of work. With 12 albums, 16 #1 radio singles, a Grammy and an American Music Award, 3 Billboard Music Awards, 21 Dove Awards, a BMI Songwriter of the Year Award with two platinum and five gold albums to his credit and over 8 million albums sold, Chris is among the most recognized and influential artists in any genre of music known around the world. It is estimated each week 20-30 million people sing one of his songs in worship and TIME magazine claimed he is the “most often sung artist in the world.” Chris is one of only four artists ever to receive the Sound Exchange Digital Radio Award for over 1 Billion digital radio streams, others include Justin Timberlake, Pitbull and Garth Brooks. Chris also became the first Christian artist to reach the Billion streams threshold on PANDORA and was presented with their BILLIONAIRE award. Chris’ concert tours have sold-out venues in major cities including New York City’s Madison Square Garden, The Forum in Los Angeles, Nashville’s Bridgestone Arena and Red Rocks, among others. For more information visit: www.christomlin.com or follow Chris on Twitter Instagram Facebook and YouTube

About Max Lucado
Max Lucado is the leading inspirational author in the United States with more than 140 million books in print in over 54 languages. His writings have been shaped into bestselling books, videos, devotionals, songs, greeting cards, booklets, Bible studies, commentaries and theatrically-released movies. According to a LifeWay national survey, 1 in 6 Americans are familiar with Max Lucado and 1 in 7 Americans have read a Lucado book. Lucado has been featured on countless national media outlets including The TODAY Show, Good Morning America, Huckabee, and Fox & Friends. Max and his wife of more than 40 years, Denalyn, call San Antonio, Texas, home. Max has served the people of Oak Hills Church since 1988. www.maxlucado.com

About TBN
Trinity Broadcasting Network is the world’s largest and most watched faith-and-family broadcaster, reaching over 175 nations across the earth with inspirational and entertaining programming 24 hours a day in 14 languages and on 32 global networks. As the world’s most influential non-profit religious broadcaster, TBN has led the way in expanding the impact of faith-based television across the earth through the creation of innovative content designed to reach every viewer demographic with the life-changing message of hope and grace. To find out more about the TBN Networks, visit us at tbn.org. And follow us on Facebook, Twitter and Instagram @tbn.

About K-LOVE & Air1
K-LOVE and Air1 are the number-one Christian audio ministries in the United States, reaching 50 states and more that 16 million weekly listeners. The ministries leadership position extends across multiple platforms, including more than 900 broadcast stations, streaming music stations and on-demand digital service available across smart speakers, digital auto dashes, tablets and smartphones. K-LOVE and Air1 are a positive cultural force through its influencers, socials and branded live-music events. Divisions of Educational Media Foundation, a 501(c)3 not-for-profit organization that is based in Rocklin, Calif.