Film News: ‘RUSS TAFF: I STILL BELIEVE’ TO CELEBRATE REDEMPTION ON THE SILVER SCREEN THIS FALL 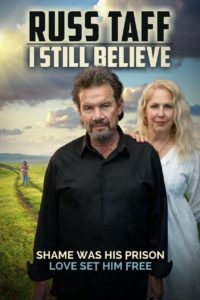 ‘RUSS TAFF: I STILL BELIEVE’ TO CELEBRATE REDEMPTION
ON THE SILVER SCREEN THIS FALL

NASHVILLE, Tenn.— “Russ Taff: I Still Believe,” a gripping documentary chronicling the beloved vocalist’s unparalleled musical journey and behind-the-scenes battle with alcoholism, is slated for a fall premiere in movie theaters around the country. Currently in production, the Fuseic Entertainment film is a story of hope, showcasing the multi-GRAMMY® and Dove Award-winning superstar’s ultimate embrace of God’s healing and restoration.

Award-winning director Rick Altizer (Chonda Pierce: Laughing in the Dark) traces Taff’s iconic four-decade career, as well as the childhood trauma he suffered at the hands of an alcoholic father and abusive mother. Unable to overcome this shame for many years, Taff himself turned to alcohol, distancing his family, threatening his career and jeopardizing his life.

“I Still Believe” also shines an important spotlight on Taff’s wife of 42 years, Tori. Her tough love, fervent prayers and unfailing devotion helped her husband find freedom from his past through God’s mercy. The couple hopes their deeply personal saga will impact and encourage others in similar situations.

“I’m a believer in looking ahead, not behind, but sometimes only time and distance can bring everything into perspective,” says Russ Taff. “Forgiveness, healing, restoration— I am living proof that Jesus is still about His Father’s business, one broken person at a time.”

“Vulnerability is scary, but our prayer is that the story of God’s love reaching right down into the middle of our messy, imperfect lives will offer hope and courage to other struggling families,” adds Tori Taff.

In addition, the powerful documentary is slated to feature appearances from such legendary artists and entertainers as Amy Grant, MercyMe’s Bart Millard, Michael W. Smith, Newsboys’ Michael Tait, Bill Gaither, and comedians Mark Lowry and Chonda Pierce, among others.

“To tell this story is an honor and a privilege and one of the most important things I have done in my career,” said Rick Altizer, “Russ Taff: I Still Believe” director and co-founder of Fuseic Entertainment. “Yet this story goes beyond Russ and Tori Taff; this is a story of the powerful, redemptive work of Jesus Christ.”