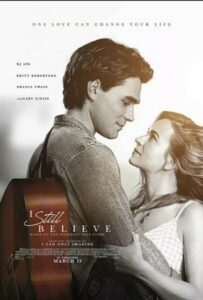 Jeremy Camp’s inspirational anthems and story has touched countless lives over much of the past two decades. Based on his life experiences, I Still Believe tells a faith-filled love story in the midst of triumphs and tragedy.

With the full support of his parents, Jeremy sets out to pursue college where he meets some very encouraging and influencial people that grow close to him on his journey. Among them is Jean-Luc Lajoie, lead singer of Christian rock band The Kry, who becomes a mentor to Jeremy for getting into the music industry.

Jeremy also meets a young woman named Melissa who captures his attention & eventually his heart. Their friendship blossoms into a relationship as Jeremy falls in love with Melissa’s heart for God. As the two traverse the ups and downs of dating, they are soon met with a challenge no one expected. Throughout her diagnosis and treatments, Melissa remains faithful to her Heavenly Father, even in her fears, as she desires to let God work through her.

We see the couple remaining faithful to each other in the most difficult times with Jeremy refusing to give up hope while Melissa accepts the fact that she may not survive and gives Jeremy permission to let her go & encouraging him to find love again when her time comes.

Following a devastating loss, Jeremy is faced with unexplainable grief, questions about his faith and doubts. Wrestling with the “whys”, he cries out to God & feels like giving up. But, at a pivotal moment, an unexpected gift guides him back to his purpose and the true calling that God placed on his life.

As we watch the story unfold, we see that through every test of faith, human strength & spiritual wrestling match, Jeremy never lost his belief in God & His ultimate plan. Melissa’s inspiring life & fortitude displayed throughout her illness has reached many and is sure to affect even more lives through this telling of her experience. With well portrayed characters & a heartfelt script capturing the emotion and soul of the message of this film, I Still Believe is a must see.

Links for I Still Believe: