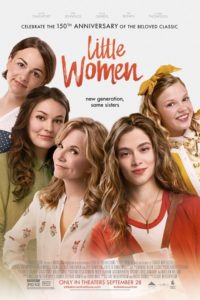 We all have this picture in our mind of how we want our life to go. We make plans, dream big dreams, throw all of our energy and effort into achieving them. Sometimes things turn out the way we intended, sometimes life throws more curves than we think we can handle and sometimes we end up where we want to be but arrive there in the most unexpected way. When we take a few detours, but never give up and listen to the encouraging voices as well as those who give us constructive, well intended criticism in order to help us grow, that’s often what leads us to where we’re exactly meant to be in the most exciting way.

Based on the beloved classic novel by Louisa May Alcott, the latest retelling of Little Women is set in modern times as the story follows four sisters and celebrates their individuality, creativity, the differences that come between them and the family bond that will always unite them.

The March sisters each have their own personality that developed as they grew up together living with their mother, Marmee, as their father served in the military. Jo is an ambitious, aspiring writer who chases after her dreams to the point where she begins getting distant from those around her. Amy comes across as being a bit self-centered and focused on material things, though she shares her talents as an artist however she can. Meg wishes to find love and experience everything that life has to offer. Beth is content with the way things are and appears to be very mothering to her siblings, but her self-confidence waivers.

While living with her aunt, Jo works tirelessly writing a novel that has been in her mind her entire life. Her aunt tells her to try to find a “plan B” in case her story never gets finished. Jo pitches her novel to a group of editors, most of whom aren’t interested in what she has to say, but one takes her under his wing and tries to give her constructive comments to help her improve her writing techniques and make her novel the best it can be. As Jo’s life in the present day plays out, we see glimpses into the past as she and her sisters were growing up through flashback scenes.

The sisters are shown being raised in a conservative, loving manner in an environment that cultivated their creativity. We see each of them experience the ups and downs of adolescence. During their formative years, the girls meet a kind young man named Laurie who shows them what true friendship is like. Over time, each sister discovers what makes them so unique in their talents and choices they make. Marmee is seen as an incredibly supportive person in her daughters’ lives as she remains a constant source of encouragement for them.

A turning point in the film comes when the family is dealt a heartbreaking blow. We see them, along with a few dear friends they’ve gained, all come together in support and love. As they mature into adults, the sisters find themselves reconnecting, especially Jo who has lost touch with her family in recent years. When they all come home for Christmas, much has changed since the girls were young, but the things that matter the most remain the same. Jo is faced with the realization that her life has taken a much different route than most. Through one of the most difficult seasons of her life, Jo shifts her attention to what is truly important in life which opens her eyes to a brand new adventure.

Overall, Little Women is a heartwarming, touching film that will make you laugh and most likely cry before laughing again as you find yourself relating to the characters and the stories they share. The message of love, strong family values and characters who remain true to themselves and their morals while embracing the person that God created them to be are just a few reasons viewers will be blessed by this film.

Rated PG-13 for some thematic elements and teen drinking