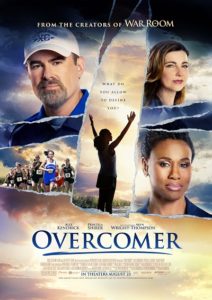 “God works in mysterious ways” is a saying that many of us are familiar with. The twists and turns of life can drop you into uncomfortable situations, test you beyond what you thought you were capable of and take you places you never imagined possible.

The redeeming story of Overcomer begins when a factory, and major source of jobs, abruptly closes. The residents of the surrounding area find themselves on hard times and are forced to search elsewhere for work causing the population to decrease and a local school to lose more than half of their students resulting in several programs and sports being cut.

In the midst of the changes, the coach of the basketball team, John Harrison, is asked to take on the school’s cross country team – comprised of one young woman, Hannah Scott, who at first glance appears to be an unlikely candidate for the sport. Coach Harrison is uncertain about his new position and laments the loss of the other sports team players. As he tries to come to terms with the issues that arise with his job at the school, it begins to put a strain on his marriage and his faith.

Hannah, who lives with her grandmother, is portrayed as a promising student with a bright future, however she struggles with an undesirable habit of stealing. Hannah competes in her first cross-country race as the only member of the school’s team and while she doesn’t win, it drives John to seek the counsel of an unexpected person.

John is seen visiting patients at a local hospital with his pastor as part of their church outreach when he is introduced to Thomas, a patient who is blind. This seemingly by chance meeting leads to John being tested both as a coach and in his Christian walk when Thomas reveals that he was a cross-country runner back in the day and asks John some thought provoking & soul searching questions. As they get to know each other, a deep connection begins to form and John finds that Thomas’ story intertwines with another character in a surprising way.

When Hannah discovers a secret about her past, she is confronted with some difficult decisions. Her search for answers leads her into a relationship with God as she seeks out deeper meaning to her life. The change that she experiences in her heart as God works has a profound effect on everyone around Hannah.

At a pivotal point, we see various characters crying out to God, each with their own convictions and reasons for calling on God for His intervention. Their unwavering faith and the power of forgiveness combine to show that with hope and trust firmly planted in God & His promises, even what is thought to be impossible can happen!

Overcomer tells a story of facing adversity head on, stepping way outside your comfort zone, putting your faith in God’s plan and the importance of forgiveness. Several points serve to spark conversations as well as cause viewers to reflect on their own lives and how much of an affect their belief in God truly has in their hearts making this a worthwhile viewing for the entire family.

Rated PG for some thematic elements