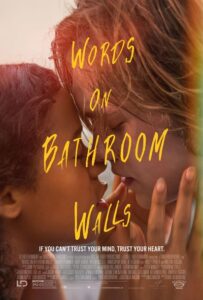 While everyone has “off” days where we feel as though something is out to get us, we can’t focus or we think no one can possibly care if we’re around, there are some who live with these thoughts and feelings 24-7 in a constant state of worry and fear – even if they aren’t always showing it on the outside.

The story of Words on Bathroom Walls invites viewers into the life of Adam Petrazelli as he fights a battle that no one else can see while he tries to go about living with paranoid schizophrenia.

His mom is one of his biggest supporters who refuses to give up hope that Adam can be cured though he has tried multiple treatments that didn’t help.
After an incident at his school, Adam is transferred to a Catholic school where he tries his best to adapt to his new surroundings there while also dealing with challenges at home.

Throughout the film, we see the manifestations of the voices in Adam’s mind – one encourages him to remain calm, one he sees as his bodyguard, one has a questionable moral compass and one more tries to make Adam believe his worst nightmares and thoughts are coming to life.

As Adam begins to develop a friendship with a young woman named Mya, her unfiltered comments start to break through walls that Adam had built up in regards to letting new people into his life. Adam and Mya’s budding relationship is not all smooth sailing as they navigate the ups and downs while not being completely honest with each other about their lives.

When he feels as though nothing else has helped, Adam seeks advice from Father Patrick in the confessional at the school. Even though he claims he doesn’t believe in God, Adam’s conversations with Father Patrick have an impact on him.

After a series of events, Adam gives into the voice of his nightmares which leads to an intense episode that nearly costs him everything. Placed in a treatment facility, he is forced to confront all that he has been dealing with inside. At a pivotal moment, Adam finds hope in an unexpected way and is inspired to finally face his ultimate fears and begin the road to healing & coping with his illness.

With many in our society considering mental health and those with an illness that is hard to be explained or understood a topic to be avoided, Words on Bathroom Walls aims to shine a light on what it’s like to be inside the mind of the person fighting this battle every second of every day. The story takes viewers on a journey through all of the emotional highs and lows that come with living with this illness as well as how to show love, support & understanding to those in your life struggling to cope with mental health. The conversations sparked by this film, as difficult and uncomfortable as they may be, are important to be had and in the long run can be potentially life saving for many individuals.

Links for Words On Bathroom Walls: