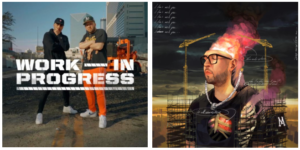 (Atlanta – June 28, 2019) — After reflecting on the pressures of becoming successful and self-reliant, rapper Andy Mineo wrote and recorded “I Don’t Need You”. The third single from his upcoming WORK IN PROGRESS mixtape seemingly glorifies the mantra but, later reveals at the core of “I Don’t Need You” is fear. On the track, Andy skillfully breaks down the walls built by past trauma and puts his pride to the side to reveal exactly what he needs.

During the podcast, Andy and Del sit down with Pastor and Author John Onwuchekwa, of Cornerstone Church in Atlanta to discuss the concerns regarding self-sufficiency, healing versus revenge and the benefits of community. Check out “I Don’t Need You” the new single and podcast now by visiting andymineo.work.

About “Work In Progress: The Podcast”
Work In Progress is a new music podcast brought to you by rapper, Andy Mineo. Inspired by his upcoming mixtape, Andy and his co-host/manager Delgis Mustafa discuss the creative process, inspiration and themes behind his “lost files”. Featuring record label executives, artists, friends and even Andy’s wife, Cristina, as guests; Work In Progress openly explores major themes from his new music including: self-limiting systems, technical ability in rap, creative fear, broken family dynamics, Christianity in today’s political climate and more. New audio & video episodes will be released every three weeks on Fridays at andymineo.work.