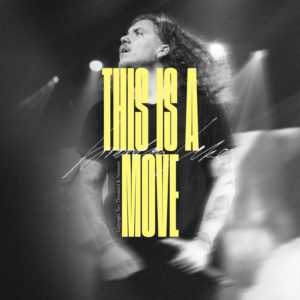 Nashville, Tenn. (Jun. 28, 2019) – “This Is A Move” from South Carolina-based worship leader Brandon Lake is being unveiled today, marking his entrance as the newest member of the Bethel Music family. The awe-inspired track was co-written with Tasha Cobbs Leonard, Tony Brown and Nate Moore. The origins of the song are personal to Lake as they stem from his friend Micah’s miraculous healing from a rare form of Multiple Sclerosis. The song found early support when Cobbs Leonard released it earlier this year.

The song infused with belief and healing was mirrored to Lake through the countless stories he encountered on Bethel Music’s well-attended “Victory Tour.” The trek with Tasha Cobbs-Leonard and Housefires sold out markets in Seattle, Miami, Los Angeles, Dallas, Phoenix, Birmingham, Houston, Tulsa, Vancouver and more. The second leg will embark this fall.

“By the grace of God, this small idea turned into a song for this season; the soundtrack to what I believe is a movement in my local church, and maybe, just maybe, some language to what I believe God is doing all around the world,” shares Lake. “I’m convinced that when we take on our true identity as sons and daughters of God, courageously live by the Spirit, and feel the compassion of Jesus towards every person—we become a dangerous force to reckoned with. We begin to meet every sickness, disease, and demon with the reality that it has to bow at the name of Jesus; and we will see God do more than we ever thought was possible.”

Lake has grown to be a familiar face within the Bethel Music Collective. In addition to touring, he led worship at last month’s “Heaven Come Conference” at Los Angeles’ Microsoft Theater. He has also been writing with mainstays of the group like Paul and Hannah McClure. Lake is based out of Seacoast Church which serves congregations throughout North Carolina and South Carolina.

“Towards the end of last year, I was asked to join the Bethel Music Collective – which is a miracle in itself. My family has always felt like we carried the same spirit, only on the East Coast,” says Lake. “This was a testimony that God’s timing is perfect because what was about to happen on tour just weeks later would forever change me, and reinforce this lesson I’ve been learning about who God ‘still is.’”

Apple Music will exclusively premiere a live component of the song on Jul. 5. To stream “This Is A Move,” click here.

About Bethel Music:
Bethel Music is a worship ministry that formed as an organic extension of Bethel Church in Redding, CA. In less than 10 years, Bethel Music has grown from being a local church music ministry to becoming a global outreach featuring a cadre of songwriters and worship leaders, with both online and on-campus worship schools. The Bethel Music Artist Collective includes Brian and Jenn Johnson, Amanda Lindsey Cook, Jonathan David and Melissa Helser, Hunter GK Thompson, Paul and Hannah McClure, Kalley Heiligenthal, Josh Baldwin, Cory Asbury, Kristene DiMarco, Sean Feucht, Emmy Rose, Bethany Wohrle and Brandon Lake. Together these artists have seven acclaimed albums that all went to the top of Billboard’s Top Christian Albums chart, in addition to a GRAMMY® nomination, seven GMA Dove Awards and a GMA Covenant Award. Bethel Music’s multi-artist double-disc live recording Have It All (2016) hit No. 1 on the overall iTunes Albums chart and No. 6 on Billboard’s Top Albums chart, becoming Bethel Music’s highest retail debut on the charts ever proceeded by Starlight, Bethel Music’s first full-length album recorded live on tour, and among their latest to top the chart. Victory, their awaited latest, is available now.