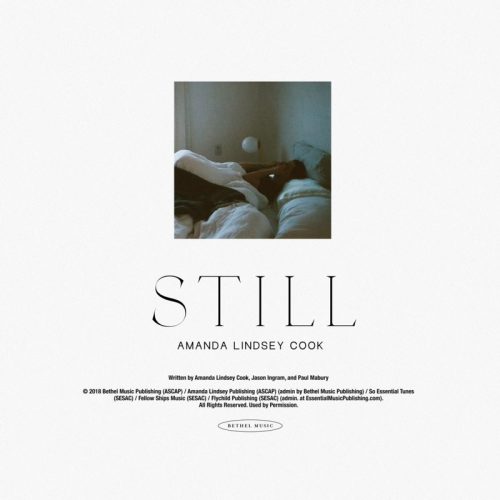 “We could all use a little more stillness,” shared Amanda. “It gets noisy and crowded in our minds and lives and 9-5’s. This song came to us in a moment of needing stillness to be a true possibility. That return to center. The gravitational pull of Peace.”

Fans can see Cook perform songs from her latest release House On A Hill, on tour this spring when she shares the stage with Hillsong United.

About Bethel Music:
Bethel Music is a worship ministry that formed as an organic extension of Bethel Church in Redding, CA. In less than 10 years, Bethel Music has grown from being a local church music ministry to becoming a global outreach featuring a cadre of songwriters and worship leaders, with both online and on-campus worship schools. The Bethel Music Artist Collective includes Brian and Jenn Johnson, Amanda Lindsey Cook, Jonathan David and Melissa Helser, Hunter GK Thompson, Paul and Hannah McClure, Kalley Heiligenthal, Josh Baldwin, Cory Asbury, Kristene DiMarco, Sean Feucht, Emmy Rose, Bethany Wohrle and Brandon Lake. Together these artists have seven acclaimed albums that all went to the top of Billboard’s Top Christian Albums chart, in addition to a GRAMMY® nomination, seven GMA Dove Awards and a GMA Covenant Award. Bethel Music’s multi-artist double-disc live recording Have It All (2016) hit No. 1 on the overall iTunes Albums chart and No. 6 on Billboard’s Top Albums chart, becoming Bethel Music’s highest retail debut on the charts ever proceeded by Starlight, Bethel Music’s first full-length album recorded live on tour, and among their latest to top the chart. Victory, their awaited latest, is available now. More about Bethel Music can be found at www.bethelmusic.com.