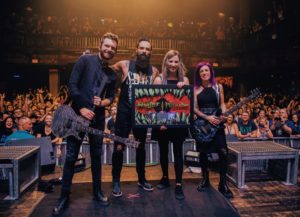 Nashville, TN (October 30, 2019) – 12x Multi-Platinum rock band Skillet continues to rake in more RIAA certifications with “Monster” being certified 3x Platinum and “Hero” receiving 2x Platinum certification. “Monster” remains one of the most-streamed rock songs of all-time with over 3 billion global audio streams. As one of Billboard’s Top Halloween Songs, joining the company of such legends as Michael Jackson’s “Thriller” and “Ghostbuster’s” by Ray Parker Jr., the band has released fun “Monster” Instagram, Facebook and snapchat filters. “Hero” has garnered over 1 billion global audio streams and has been used in sync partnerships with everyone from the NFL, NHL, MLB, SCC and WWE. 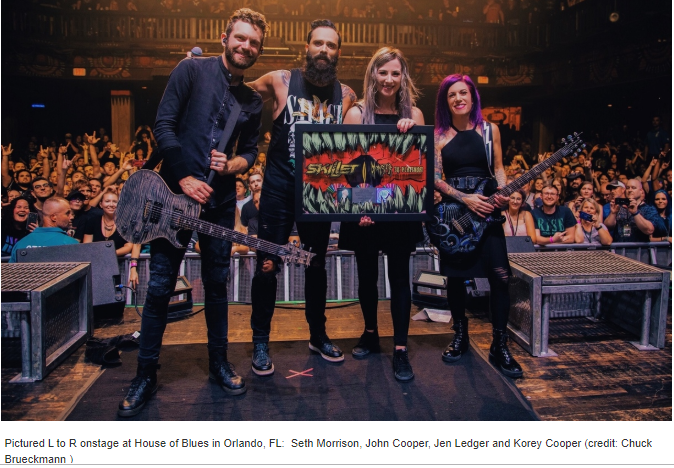 To celebrate the certifications, personalities from top Active Rock stations in Dallas and Orlando surprised the band at two VICTORIOUS SKY tour stops last week. In Dallas, Ayo from KEGL joined the band backstage for a Facebook Live interview, closing with the plaque presentation for “Hero.” In Orlando, Dickerman from WJRR surprised the band on stage with the 3x platinum plaque for “Monster.”

In addition to the certifications, Skillet is also celebrating their tenth Top 10 Active Rock single with their latest single from the best-selling album Victorious, “Legendary.” In addition to the hit track being tapped as the official theme song for WWE’s “RAW” on USA Network, the WWE also recently used the song as the trailer for their brand new 2K20 Video Game. Also nabbing the energetic track lately is the NBA and NCAA as well as MLB during the opening of the NCLS game two between the St. Louis Cardinals and Washington Nationals. 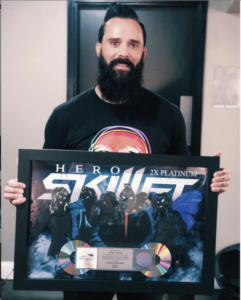 Music isn’t the only area where Skillet is seeing success these days. Z2 Comics released their brand new, best-selling graphic novel, EDEN: A Skillet Graphic Novel in August. The New York based publisher began collaborating with musicians to create graphic novels centered on unique stories and exclusive music in 2016, with EDEN now marking Z2’s best selling book of all time.

Skillet recently wrapped the VICTORIOUS SKY tour, a 21-city trek with Alter Bridge. Starting November 6, the band launches a European headlining jaunt through the remainder of the year, much of which is already sold out, including stops in London, Paris, Hamburg and Budapest. For tickets and more tour information, please visit: www.Skillet.com/tour.

About Skillet:
One of the best-selling rock bands of the 21st century, two-time GRAMMY® Award-nominated, Pandora Billionaires Club recipients, multiplatinum Wisconsin quartet Skillet—John Cooper [lead vocals/bass], Korey Cooper [guitar/keys], Jen Ledger [drums/vocals], and Seth Morrison [lead guitar]—write the soundtrack to triumph. An undying spirit humbly asserted and affirmed the band as one of this generation’s most successful rock acts. However, as all classic underdog stories do, it happened quietly under the radar. By 2019, they not only garnered a pair of GRAMMY® Award nods and sold over 12 million albums worldwide, but they also took home a Billboard Music Award for the double-platinum Awake. Its breakout single “Monster” remains “one of the most-streamed rock songs of all-time” with over 3 billion global audio streams. 2016’s Unleashed bowed at #3 on the Billboard Top 200. Going #1 on Rock Radio, the lead single “Feel Invincible” cracked 150 million global audio streams and went platinum. Meanwhile, the gold-certified Unleashed became their fourth consecutive album to receive either a gold, platinum, or double-platinum. To date, nine original tunes earned RIAA recognition in tandem with high-profile syncs by everyone from WWE and Marvel to ESPN and NFL. Between selling out arenas on four continents, the group performed on CONAN and graced the pages of USA Today and New York Times, to name a few. In 2018 alone, the band clocked 1 billion streams. This momentum continues on their 2019 tenth full-length, Victorious. With the bulk produced by Korey and John, it lives up to its name for Skillet as their most triumphant body of work yet.