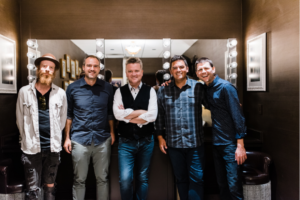 “CHRIST OUR HOPE IN LIFE AND DEATH”

SINGLE IS SET TO RELEASE ON

MARCH 20th FOR THE EASTER SEASON

NASHVILLE, Tenn. (March 18, 2020) — Getty Music is set to debut “Christ Our Hope in Life and Death”, written by five critically acclaimed songwriters, Keith Getty, Matt Papa, Jordan Kauflin, Matt Boswell, and Matt Merker. This is the first song that the writers have written together as a team.

Keith Getty states, “We wrote this song over a period of two years with a number of our team of writers, and Kristyn recorded it with Matt Papa. It is so timely in how it speaks to us and our children. The hymn is inspired by the Heidelberg Catechism of 1563, which begins with the profound question, ‘What is your only comfort in life and in death?’ For centuries, believers have learned the Christian faith beginning with that question. Why start there? Because death is the one statistic we all can be sure of. Less than 3% of modern songs sing of death, in contrast to many of the classic hymns, liturgies, and catechisms. Christianity that does not cultivate a constant awareness of our resurrection hope in the face of death is not authentic Christianity. We need to love those around us enough to sing about death. The only comfort we will truly find this season is to know we can face death by trusting Christ, who conquered the grave.”

Stream and purchase the single on iTunes, Spotify, Apple Music, Amazon, and the Getty Music Store at www.gettymusic.com/christ-our-hope

Keith Getty along with his wife Kristyn Getty are pre-eminent modern hymn writers in the world today, known for hymns such as “In Christ Alone.” Born in Northern Ireland, the award-winning artists became the first musicians of the modern era to be given the OBE from Queen Elizabeth II for service to music and hymn writing. As “ambassadors” of hymns they have also founded the “Sing” Conference which welcomes over 15,000 people in Nashville as well as founding a publishing company, record label, touring company, online learning and foundation. Keith and Kristyn live between Northern Ireland and Nashville with their four daughters.

Matt Boswell is the founding pastor of The Trails Church in Prosper, TX. Matt has been involved in church planting and pastoral ministry since 1998, and is also an author and hymn writer, known for songs including “His Mercy Is More” and “Come Behold the Wondrous Mystery.” Matt is a Ph.D. candidate at Southern Seminary with an emphasis in Christian Worship and Biblical Spirituality. Matt and his wife Jamie have four children.

Jordan Kauflin has been involved in leading worship and writing songs for corporate worship since he was a teenager. His songs include “I Will Wait for You (Psalm 130)” and “All I Have Is Christ.” He has served as a pastor for over a decade and enjoys training the next generation of worship leaders. Jordan and his wife Tali have five children.

Matt Merker is Director of Creative Resources & Training for Getty Music. Matt has contributed to several modern hymns, including “He Will Hold Me Fast.” He is the author of the forthcoming book Corporate Worship: The Church Gathers as God’s People. Matt and his wife Erica are members of Trinity Church and live in Nashville, TN with their two children.

Matt Papa is a songwriter, worship leader, and author whose heart longs to see people from every corner of the world set ablaze by the love of God that is in Christ Jesus. He serves as the Worship & Arts Director at Christ Covenant Church in Atlanta, GA. His latest project, “His Mercy Is More,” showcases over a dozen songs co-written with frequent collaborator Matt Boswell. Matt and his wife Lauren have five children.

Keith and Kristyn Getty are pre-eminent modern hymn writers in the world today, known for titles such as “In Christ Alone.” Born in Northern Ireland, they are multi award-winning artists with Keith becoming the first musician of the modern era to be given the OBE from Queen Elizabeth II for service to music and hymn writing.

According to CCLI, they have written over 30 of the top 500 sung songs in USA & UK today and Integrity music estimate 100 million people in the world today in all forms of churches use their music.

As “ambassadors” for hymns they have performed as a duo for Presidents and Prime Ministers, as well as an annual national hymns tour and Christmas tour including sell out shows each year at Carnegie Hall and Kennedy Center. They wrote the “Sing” book and founded the “Sing” Conference which now welcomes over 15,000 people to Nashville each year. The Getty Music Group, based in Nashville, is now gone to a publishing company, record label, touring company, online learning and foundation, speaheaded by the couple.

Keith and Kristyn live between Northern Ireland and Nashville with their four daughters.