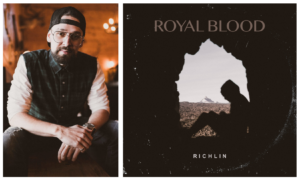 NASHVILLE, TENN. (FEBRUARY 06, 2020) Gotee Records announces RICHLIN to their family of artists as he debuts his song, “Royal Blood,” available everywhere tomorrow as a dual-single. The official music video for the song is online now (click here or watch below). RICHLIN’s “Royal Blood” release is in the format of a dual-single, which features the title track and the intimate worship version, “Royal Blood (Spilled for Us).” It is also a maxi-single at AppleMusic and iTunes, which features both songs along with the music video. “Royal Blood” is Pandora’s Pick of the Month for February and will be featured on the Forward Message with Jordan Feliz show on SiriusXM this month. RICHLIN is also the cover artist this week on AmazonMusic’s Divine Sound playlist.

“I’m so proud and exited to introduce RICHLIN to the world,” shares label-mate Ryan Stevenson. “We both grew up in tiny little farming communities in Southern Oregon and have been close friends for many years. I’ve watched him grow and mature over the years and I know that his heart is rooted and established in the deep things of the Lord. It’s been a huge honor to be able to bring him into my music/label family, and to see him become aligned with such an amazing team. His heart and music is a mere reflection of his time spent in the secret place, cultivating a fire of intimacy with the King of Kings. Not only am I excited to see his music impact the world, but I’m equally exited to see his infectious heart and personality minister to everyone who hears and meets him!”

“I want to craft and produce art that’s vertical, but say it and produce it in a way that’s reaching a different demo,” RICHLIN explains about his music and new single. “We’re missing an entire generation musically. I want to create something that is synergistic with reaching people in their 20s and people in their 50s. I don’t even know if it’s possible, but I want to go after it and it’s in my heart.”

RICHLIN is being managed by Mike McCloskey of First Company Management. He will also be on tour with label-mate Ryan Stevenson this spring in April and May.

ABOUT RICHLIN: A southern Oregon boy from the ranch town of Paisley, population maybe 250. The son of a rancher and farmer’s daughter who, from his earliest teen years, served as a worship leader. He openly listened to CCM and country music, yet privately consumed the 90s-era hip-hop culture. He was both a basketball player and a drummer. Even with all of the things that define newcomer Brandon Richardson (aka RICHLIN)’s upbringing—and, in some ways, even his current life—if there’s one word that would sum him up succinctly and poetically, it would have to be “paradox.”

Here’s a man who has a genuine heart for Christ and, also—thanks to his biblical literature collegiate education—a profound knowledge of the Scriptures (something that he says has developed him into a solid songwriter). Here’s an individual who makes no qualms about the fact that he wants to “facilitate an encounter with the presence of God” via his art and his life—and yet, upon first listening to his music, you’d probably be caught totally off-guard. In many ways, his voice is reminiscent of a favorite alt-rock artist, while his sound is progressively haunting. Definitely not something you’d expect from a CCM fan, a country music enthusiast or a hip-hop head. Read more about RICHLIN here.