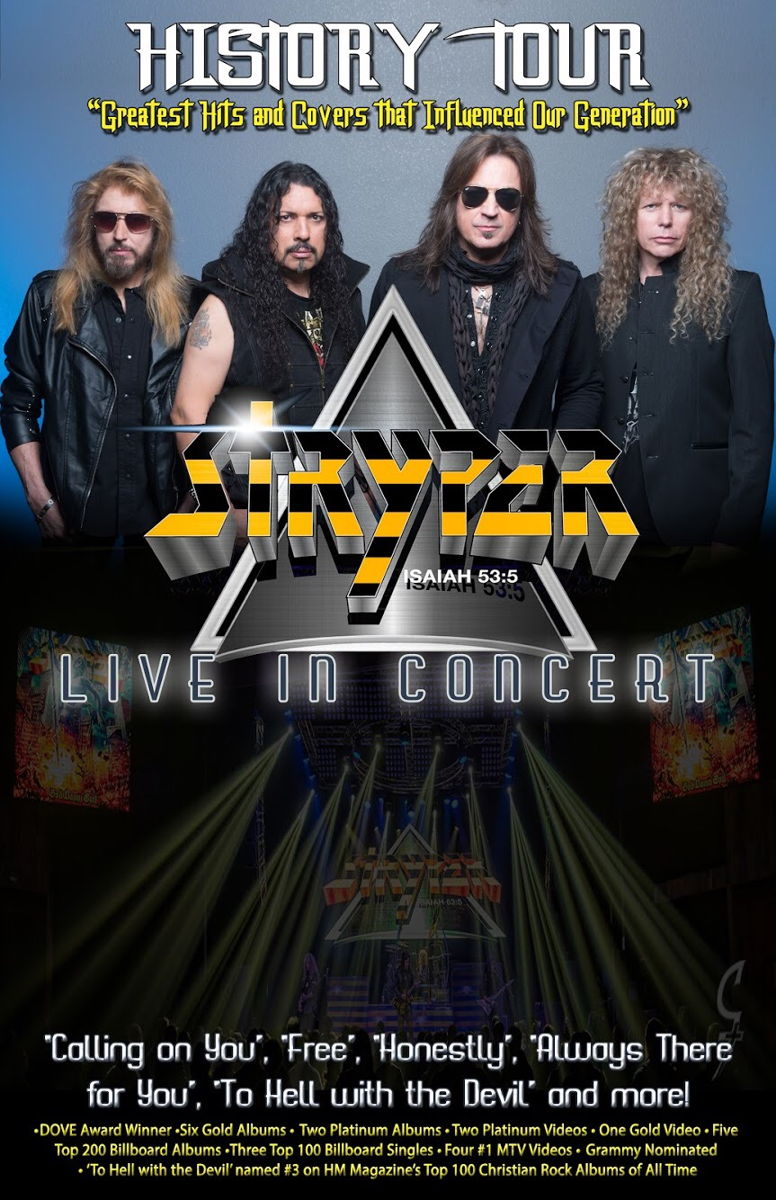 Chart-topping rock band STRYPER will return to the road in May for the 2019 HISTORY Tour — Greatest Hits & Covers that influenced our generation. The all-new HISTORY Tour comes on the heels of the band’s yearlong God Damn Evil World Tour, which concluded in Japan in February.

“The music of our generation was and is timeless,” says STRYPER frontman Michael Sweet. “It was all about the song and musicians who inspired you to want to play. We grew up on bands like Van Halen, Judas Priest, Iron Maiden, Black Sabbath, Journey and BOSTON. We wouldn’t be here if it wasn’t for the music of these legendary bands. We thought it would be an amazing experience to play some of these songs live and show you, the audience, exactly were our roots lie. We’ll also be incorporating our own hits & videos from 1984 to 2019, and something from Perry’s past as well (Firehouse). We’re excited to get back out on the road and we look forward to seeing you soon!”

Exclusive meet & greet packages will be available in most cities. Fans will have the option of purchasing either a Standard Meet & Greet Package or VIP HISTORY Tour Meet & Greet Package. Both meet & greet packages include an opportunity to meet the band, get autographs, take photos with the guys and receive exclusive one-of-a-kind merchandise. However, the VIP HISTORY Meet & Greet Package (limited to 6 fans per city) offers additional merchandise options and a stage tour (hold Michael’s guitar, photo in front of Robert’s drum kit, overview of gear with STRYPER crew member).

STRYPER continues to dominate the hard rock/heavy metal scene with the their critically-acclaimed tenth studio album, God Damn Evil – released in 2018 via Frontiers Music srl. Rocking since 1984, STRYPER is responsible for such classic ’80s metal albums as Soldiers Under Command, To Hell with the Devil and In God We Trust. In fact, STRYPER is the first band to ever have two songs in MTV’s Top 10 simultaneously with their hits “Free” and “Honestly.” To date, the Dove Award-winning and GRAMMY-nominated band has sold over 10 million records worldwide.

God Damn Evil is available now wherever you can buy or stream music: http://radi.al/GodDamnEvil

More dates to be announced!