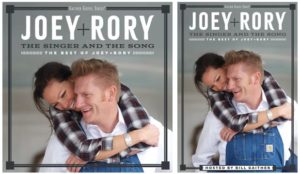 NASHVILLE, Tenn. – September 7, 2018 – Featuring 20 of Joey+Rory’s most-requested hits as well as never-before-released content, The Singer And The Song: The Best Of Joey+Rory (Gaither Music Group/Farmhouse Recordings) offers a closer look into the GRAMMY-winning duo’s history and the music that defined their career. The “Best Of” collection includes a CD with the country music duo’s hits, while a DVD offers interviews with Rory and more on the couple’s love story and life together.

The Singer And The Song CD features more than a dozen songs that brought out the best in the husband and wife’s lives and careers, along with a personal, 28-page booklet from Rory. The DVD consists of more than two-and-a-half hours of content, including a tour of the family farm, acoustic performances by Rory and an interview with Bill Gaither that captures Rory’s ever-inspiring story of hope in spite of hard times.

“The songs that appear on this ‘Best Of’ record are not our greatest hits,” Rory says in the CD booklet. “Instead, they are the songs that brought out the best in us. These, along with many others. Each time we went into the recording studio, we tried our best to choose the best songs we could for where we were in our lives. Sometimes they were songs that we had written, a good bit more of the time they were songs from friends, strangers, and now and then heroes of ours.”

Watch this trailer for more information about The Singer And The Song:  https://www.youtube.com/watch?v=AqF238sX2eg

Artist and storyteller Rory Feek has found a new normal over the past few years, parenting his daughter Indiana, authoring two bestselling books, managing his farm and singing for the first time since the passing of his wife, Joey, in 2016. The couple captured the hearts of millions as Rory chronicled their love story and Joey’s cancer battle on his blog, as well as their preparation for her passing in March 2016.

But there’s much more to the story: the couple met in the early 2000s, when Joey was still an aspiring country singer. They eventually fell in love, married and recorded Joey’s debut album, If Not For You (Gaither Music Group/Farmhouse Recordings) re-released in 2017. After gaining attention as finalists on CMT’s “Can You Duet” in 2008, Joey+Rory went on to release eight albums, winning a GRAMMY® Award for Best Roots Gospel Album for Hymns (Gaither Music Group/Farmhouse Recordings) in 2017.

“I know how amazing this life that God has given us is, even though it’s taken some tragic turns,” Feek says in the DVD. “I mostly walk around pinching myself. That’s saying a lot, but it’s because I didn’t do it. She didn’t do it. He did it. And as much as there have been some very, very hard times the joy-filled times outweigh them. You carry them around with you, and for some reason they put some perspective to the pain, and it helps.”

The Singer And The Song: The Best of Joey+Rory CD and DVD will be featured as a TV special airing on over 15 networks weekly, including RFD-TV, DIRECTV, Dish TV, TBN, CTN, The Heartland Network, FamilyNet, GMTN, Guardian, Liberty, TCT, TLN and GaitherTV.  It will air in Canada on Vision TV, The Miracle Channel, Grace TV and CTS.  The products are exclusively distributed by Capitol Christian Distribution and Universal Music and are available throughout general market stores and the Christian marketplace in addition to online retailers including iTunes, Apple Music, Amazon.com, CBD.com and Gaither.com.

For further information regarding Joey+Rory or to read Rory’s blog visit www.roryfeek.com.