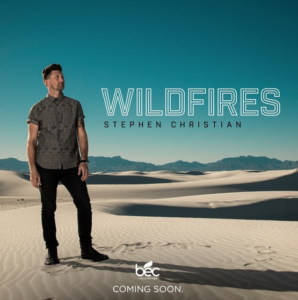 STEPHEN CHRISTIAN SET TO RELEASE NEW ALBUM, WILDFIRES, WITH BEC RECORDINGS ON JULY 28
DEBUT SINGLE “GLORIA” IS THE NO. 2 MOST ADDED SINGLE AT HOT AC/CHR THIS WEEK

SEATTLE, WASH (MAY 25, 2017) – Anberlin’s frontman, Stephen Christian announces the release of his new solo album, Wildfires, set to release on July 28th with BEC Recordings. With the disband of Anberlin in 2014 and working four part-time jobs, Christian began searching what was the next step for his future. During that challenging time, he was able to create this worship project that has special meaning to him. The debut single, “Gloria,” from the upcoming solo album is already gaining traction at radio as it is the No. 2 most added single at Hot AC/ CHR this week.

“Gloria” was written shortly after Anberlin was disbanded and his other jobs had fallen through, and the lyrics reminded him that God was in control: Tell me / Who else would we call on in times of trouble? / Who else could we give our adoration?

“This album was written in the five months after the end of Anberlin, it was a time of great personal struggle and triumph,” shares Christian. “Some of the greatest songs in history have come from an artist’s darkest times in life. This feels like the first time I put out a record, and in a way it is. These songs are me, they are the overflow of my heart and when my kids want to listen to my music someday, Wildfires will be the first record I show them.”

Following the retirement of Anberlin, Stephen Christian is now a full time worship leader at Calvary Albuquerque in New Mexico. Anberlin was a staple in the rock music industry since 2003 and has been featured on USA Today, Billboard, A.V. Club and many more. Seven albums and 11 years later, the band released their final full-length album in 2014 with Tooth & Nail.