Todd Agnew ‘From Grace To Glory: The Music Of Todd Agnew’ 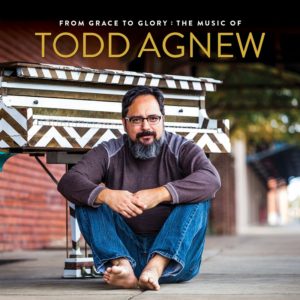 Todd Agnew is known for sharing genuine worship with honest lyrics that take a bold stance; often challenging listeners to take a closer look at their faith. His latest release, From Grace To Glory: The Music of Todd Agnew, is a collection of songs that some will be familiar with, but is certainly not your typical greatest hits album. In addition to favorites such as “Grace Like Rain”, “My Jesus”, “On A Corner In Memphis” & “Did You Mean Me?”, also included are several tracks that have made an impact on fans over the years as well as new recordings.

One of these brand new songs, “Glory To Our Great Redeemer”, opens the album with praise to Jesus giving thanks for His sacrifice that cleansed us of our sins while celebrating His victory over the grave.

“Nearer Home” is another new offering that uses the imagery of a ship at sea to represent how our lives and faith are tested throughout the storms of life. When the waves of struggle, fear and doubts threaten to pull us under, if we look to Jesus as our guide & allow His grace to carry us, we can be assured that He will lead us to where we are meant to be.

“The One That You Want” and “Did You Mean Me?” each tackle the very real questions of ‘How can God use someone like me?’ and ‘How can He possibly still love me after everything I’ve done?’ that so many of us wrestle with when we feel as though we continue to fall short & mess up on a day to day basis. While we should always strive to turn from sin and live a life that brings honor to God, His mercy, forgiveness & love is there for those who seek it.

Originally intended to be included on Todd’s album Need, his version of “His Eye Is On The Sparrow” stands out with its smooth jazz vibe and guest vocals by Trulah Maloy who was a student at Memphis’ Visible Music College at the time of recording.

“On A Corner In Memphis” expresses how there are times when attending a typical church service on Sunday morning can seem like merely going through the motions. The powerful words depict the difference between being open and vulnerable about our brokenness as opposed to feeling the need to put on a brave face and pretend that everything is ok when you walk through the doors on Sunday morning. Set to a simple piano backdrop, the arrangement allows the message to be the focal point of the song.

“This Is All I Have To Give” tells the story of Jesus’ birth and young life from the perspective of what Joseph may have been experiencing while trying to comprehend the fact that his baby boy was the Son of God. It finds him wondering what he could possibly teach his child while also showing the love & selflessness he had as he raised Jesus as his son.

Infused with bluesy guitar grooves, “In the Middle of Me” recognizes the importance of giving Christ priority in your life. When our focus is on Him, everything else will fall into place.

“My Jesus” brings the concept of ‘What Would Jesus Do?’ to another level as it takes an honest look at what it really means to live as Jesus did according to the scriptural account of Him & His life. While the gritty lyrics might make some uneasy, it’s what may be needed to wake listeners up to the comfort level of their own faith as it raises several valid questions to ask yourself about what you believe.

Closing the album are two of my personal favorites, “This Fragile Breath (The Thunder Song)” which is a powerhouse anthem celebrating the awe and wonder of God and the ways in which He speaks through all of Creation, while the final track is perhaps the most well-known within this collection, “Grace Like Rain”. Although it’s basically adding a chorus to the beloved hymn, “Amazing Grace”, it’s that addition that resonates with me and is something I never grow tired of hearing.

One of the things I love about Todd Agnew’s music is how visual his lyrics are. As I listen, I can see every song playing out in my mind which really brings the messages to life in ways that other artists songs in the Christian music genre do not. Todd’s rugged vocals, musical arrangements that grab your attention and the fact that every song has the potential to deeply affect your relationship with God make From Grace To Glory: The Music of Todd Agnew a powerful record whether you have been a longtime listener or are discovering these songs for the first time.