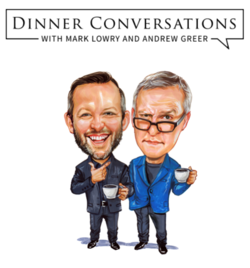 NASHVILLE, Tenn. – Television series and audio podcast Dinner Conversations with Mark Lowry and Andrew Greer launched in 2017 as one of the only episodic faith-based video podcasts. The trendsetting show continues to break ground through a new partnership with Amazon Prime, debuting its second season on the popular platform today. 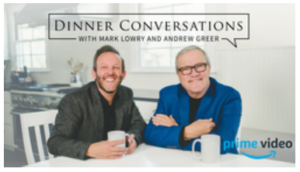 “We are thrilled to bring Dinner Conversations to the Amazon Prime platform,” shares Chris Bueno, President of Ocean Avenue Entertainment. “Since it’s launch, the show has provided a unique combination of entertainment, laughter, and serious discussion. We are confident that the series will find a whole new, engaged audience that is hungry for an honest conversation on the convergence of faith and daily life.”

During its first season, Dinner Conversations consistently topped the podcast charts, debuting at #1 on iTunes’ Video Podcast Chart (Religion & Spirituality) and #7 on iTunes’ Overall Video Podcast chart. “I never knew our little show that could would go all the way to Amazon Prime,” stated co-host Mark Lowry. “And to think I’m retired!”

Produced and directed by Andrew Greer, Dinner Conversations is co-produced by Mark Lowry and Celeste Winstead. Chris Cameron of Center Street Media serves as Assistant Director. “In a culture driven by being connected, we are finding ourselves increasingly disconnected,” Greer shares. “I think engaging in face-to-face conversation will be the fulcrum that helps us reconnect with who we are as humans – and so to feel a little less alone in life.”