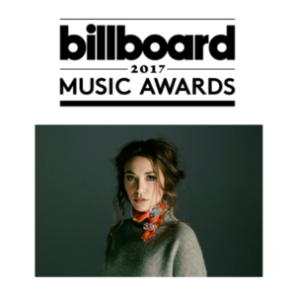 In response to her multiple wins, Lauren Daigle exclaimed, “Wow! What an honor! I’m just blown away by the response of people who have connected with this music. In the pursuit of creative passion, it takes a village to accomplish dreams like this. I’m so thankful for all of my team, label, family, and friends who have believed in me from the beginning, and to all those who have invested in my work through purchasing or streaming this record. Thank you from the bottom of my heart. A major thank you to Billboard for giving a platform for our music to live, and also thanks to the fans. I am forever grateful. Much love!”

The Billboard Music Awards nominees are based on key fan interactions with music, including album and digital songs sales, streaming, radio airplay, touring and social engagement. These measurements are tracked year-round by Billboard and its data partners, including Nielsen Music and Next Big Sound. The BBMAs are based on the reporting period of March 18, 2016 through March 16, 2017. Since 1940, the Billboard charts have been the go-to guide for ranking the popularity of songs and albums and are the ultimate measure of success in music. For more information, please visit BillboardMusicAwards.com.

ABOUT LAUREN DAIGLE: Signed to Centricity Music in 2013, Lauren Daigle’s first full-length album How Can It Be, now RIAA Certified Gold, released in April 2015. The album was also nominated at the 2016 GRAMMY®  Awards for Best Contemporary Christian Music Album, while one of its top singles, “Trust In You,” was nominated at this year’s GRAMMY Awards for Best Contemporary Christian Music Performance/Song. Along with winning a 2016 Billboard Music Award for Top Christian Album (How Can It Be), Daigle was also nominated last year for an American Music Award (Favorite Artist Contemporary/Inspirational). Just last month, Daigle performed on the 52nd Academy of Country Music Awards™ with Reba McEntire. The duo sang McEntire’s single “Back to God,” which was lauded as one of the top collaborations that night.

How Can It Be spent six weeks at No. 1 on Billboard’s Top Christian Albums chart. The album also premiered in the Top 30 on the Billboard 200 and reached No. 1 on iTunes’ Christian Gospel Top Albums Chart. To date, the album has achieved an astounding 880,000 in total consumption, including 610,000 album sales, nearly 1.3 million in track sales, and more than 220 million streams, positioning Daigle as the fastest-selling new artist in Contemporary Christian music in the past decade. In her career to date, Lauren Daigle has had more than 172 million YouTube and Vevo views, with approximately 479,600 subscribers. Her video for “Trust in You” has had more than 28 million views.

Follow Lauren Daigle by visiting LaurenDaigle.com and on the social links below.