The Afters ‘Live On Forever’

The Afters ‘Live On Forever’ 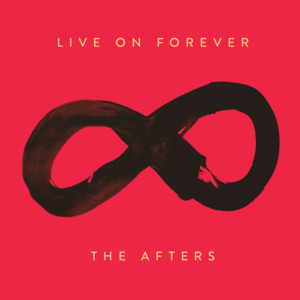 The Afters release a new album, what does that mean for you and I? Awesome music is what it means! The Afters release their 6th studio album since the band started in 1999, “Live On Forever.” This album does not disappoint. The record is packed full of cutting edge pop and rock music that will surely be pleasing to the ears. Most importantly the message throughout this project is how strong and mighty God’s love remains, such as it says in the song Battles “You’re fighting my Battles!”

This project starts out with a large modern pop track called “Shadows.” The first thing that jumps out is the incredible production and depth to detail. It should be known Jordan Mohilowski (drummer) produced this incredible album. “Shadows” will be sure to get you moving and surround you in a veil of musical bliss. The drums have a huge impactful sound giving the song much needed “thump.”

The project continues to the Title track “Battles.” It’s clear to see this song is special from the start. The message is a reminder of how God is always there to fight our battles and pick us up from the ground. The chorus is catchy and destined to be another radio hit.

“Sunrise” is another strong song with another hard-hitting chorus that will have you singing over and over again.  Followed by “Wake up my Heart”, which easily could be a radio single. The Afters are excellent at writing songs with very strong chorus and that pattern remains constant throughout.

The radio single, “Live On Forever” has already huge success. This song has been featured in sporting events and major radio play. It’s not hard to understand why this song stands out.  The hard-hitting track again features amazing production and quality detail with a large chorus.

A few other songs that stuck out were a foot tapping pop track called “Time of my life” and an anthem based song “Survivors.”

The project ends on a beautiful note with the song “When You’re With Me.” The vocals and music are so soothing and crisp. The message is one of encouragement stating God will be with you in till the very end, no matter the struggle.

I think what makes the The Afters truly special is their heart as a band. Listening to the lyrics, you fully understand why they play music.  The Afters are a band that crosses overs to the mainstream circuit from time to time, but it does not change their message one bit.

This definitely is a solid buy for you or a friend. This band continues to put out quality albums since their start and I do not foresee that ceasing anytime soon.

More from The Afters:

Links for The Afters: