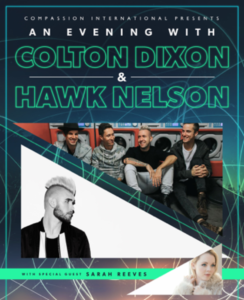 Dixon will be touring in support of his third studio project, Identity, which debuted at the top of Billboard’s Christian Albums chart last year, and includes the Top 5 radio single, “All That Matters,” the official music video for the song premiering on People.com this past year.

“I’m so excited to play new music for the fans and share the stage with our friends in Hawk Nelson,” Dixon says. “It’s going to be an awesome tour of celebrating life, love, and the One who makes it all possible.”

Hawk Nelson band members Daniel Biro, Jonathan Steingard, David Niacaris and Micah Kuiper add, “This will be a tour of firsts! The first tour of what is going to be a great 2018. Also the first time we get to tour alongside Colton Dixon and his awesome band. And the first time everyone can hear us play new music from our upcoming album, Miracles!”

A special VIP ticket is available in most markets which includes a pre-show artist meet & greet with early entry for the best seats. For details and ticket links, visit www.coltondixon.com or www.hawknelson.com.

“An Evening With Colton Dixon & Hawk Nelson” Spring 2018 Tour
*All dates and venues subject to change. Additional dates to be added.

About Colton Dixon:
Colton Dixon quickly became a household name in 2012 when he made it to the top seven on Season 11 of Fox’s hit show “American Idol,” and his career has been on the fast track ever since. Dixon’s 2013 debut, A Messenger, set the record for biggest first-week sales by a new solo Christian act, becoming the No. 1 selling album by a new Christian artist. In just a few short years, Dixon has already played live for more than 1 million fans, performing at festivals like Winter Jam and touring with acts such as Third Day, TobyMac and Britt Nicole. Dixon has also been named a Steinway & Sons artist, following in the footsteps of legendary artists such as Harry Connick, Jr. and Billy Joel. Dixon’s sophomore effort Anchor includes the most played Hot AC single of 2014, “More Of You,” which spent three weeks at No. 1, as well as “Through All of It,” his fourth consecutive No. 1 at Hot AC Radio. In 2013, Dixon won a Dove Award for Best Rock/Contemporary Album Of The Year, along with two additional nominations. In 2015, Anchor was honored with the Dove Award for Rock/Contemporary Album of the Year. Dixon received back-to-back K-LOVE Fan Award nominations for Male Artist of the Year in 2014 and 2015. Dixon’s third studio album Identity, debuted at No. 1 on Billboard’s Top Christian Albums Chart in March 2017, and features the Top 5 radio hit “All That Matters.” For more information, visit www.coltondixon.com.

About Hawk Nelson:
This band has won the hearts of thousands since its debut release in 2004. Hawk Nelson has released seven studio projects (Letters to the President, Smile It’s the End of the World, Hawk Nelson is My Friend, Live Life Loud, Crazy Love, Made, and Diamonds). Their album Diamonds (2015) produced the No. 1 Billboard AC Indicator single “Drops In The Ocean,” which spent nine weeks at the top, a first for the band. Hawk Nelson has been awarded two Canadian GMA awards, multiple GMA Dove Award nominations as well as a JUNO nomination. The band’s music has been featured on NBC, MTV, WB, WGN, KTLA, Nickelodeon and the NFL Network. Their music has been used with special promotions for American Idol, the NFL, Nike, Olympics, NHL and Michelle Obama’s “Big Day Out” campaign. Hawk Nelson is Jonathan Steingard (vocals, guitar), Daniel Biro (bass) and Micah Kuiper (guitar) and David Niacaris (drums). For more information, visit www.hawknelson.com.

About Sarah Reeves:
Pop artist and songwriter Sarah Reeves signed her first record deal at age 18. After years of aggressive touring, Reeves took an indefinite hiatus to focus solely on songwriting, penning songs for the likes of Jesus Culture, Kari Jobe and Natalie Grant, among others. With a fresh sound stirring in her soul, Reeves began writing personal songs she, herself, wanted to record, which led to a new label deal with Word Entertainment. Since then, Reeves has reintroduced herself as an artist to audiences across the nation on the Winter Jam Tour Spectacular and on tours with Crowder, Plumb, NewSong and more. When she’s home in Nashville, Reeves regularly leads worship at The Belonging Co. Throughout 2018, she’ll be releasing new music, piece by piece, culminating in a brand new 13-track full length project. For more information, visit www.sarahreevesmusic.com.

About Compassion International:
Compassion International is a Christian child development organization that works to release children from poverty in Jesus’ name. Compassion revolutionized the fight against global poverty by working exclusively with the Church to lift children out of spiritual, economic, social and physical poverty. Compassion partners with more than 7,000 churches in 26 countries to deliver its holistic child development program to over 1.9 million babies, children and young adults. It is the only child sponsorship program to be validated through independent, empirical research.  For more information, visit www.compassion.com.