For All Seasons ‘Clarity’ 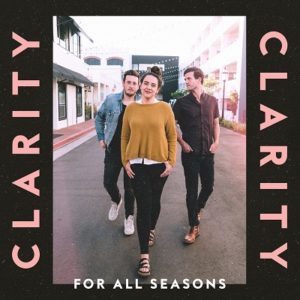 For All Seasons is a band new to the scene and appropriately titled given their music cultivates an atmosphere of hope no matter what season of life listeners may find themselves in. With female lead singer, Emily Hamilton (guitar and keys), Johnny Hamilton (drums), and Jeff Luckey (guitars, keys, vocals), they’re a small multi-talented group. Based on the West Coast, they each travel with their respective spouses-priceless.

The trio met in college and initially pulled the group together to audition for Biola University’s weekly chapel services, but their momentum never lacked. Other playing opportunities presented and they took all they could manage.

This band doesn’t just pride themselves on writing songs and performing music concerts. Their lead singer admits they learned the ropes of true ministry at the prestigious California camp, Hume, which welcomes more than ten thousand students each summer. Their involvement there honed their ministry capabilities that became real. “People, conversation and relationship have become such a foundation of our ministry, and I know that we owe so much of that to camp,” Emily said in a recent press release from Bozeman Media.

These growing ministry opportunities allowed them one major decision after college graduation, a full-time music ministry career, or their once sought-after “day-job.” Taking the step of faith, they soon found themselves signing a recording contract with Tennessee-based Centricity Music.

For All Seasons impressively wrote over 60 songs for their ultimately seven-track Centricity Music debut Clarity. Most music from artists come from personal experiences, however this group takes it to a deeper level with a message of pushing through circumstances like the unique song “Bigger Than” that unpacks Emily’s struggle with anxiety.

Majority of their songs aren’t intended for congregation sing-along, (except maybe “Bigger Than”) yet many have a resonating tune to sing along with.  These thoughtful songs are intended for listeners to connect with Jesus in their heart through the revenant real-life storylines woven into every stanza.

Being a musician myself, I appreciate the true tones, dynamics, and overall flow of the songs, and may I add real musicians. “Clarity” has a modern electric feel with a driving force of lead vocals. The message reminds us that God is our source of trust, control, and clarity in life.

“Fight Anymore” reminds me of someone crying out to God, claiming the hurting, struggles, and battles will be over in eternity because Jesus will take their pain away forever.

“Higher” has a similar electric vibe as “Clarity,” but gives ranges that mingle flawlessly from high to low, demonstrating their true abilities and giftedness with their craft. Its message reminds us to trust in who God is, far beyond what we can see, because His ways are higher.

However, “No Other” is hands down is my top pick from this album because of the powerful melody. They hold nothing back with their true musical vibrancy, but most importantly, the true message of the cross. The lyrics recount the many attributes and miracles of Jesus and how no one else carries power in their name. The continuously progressive beat gives a sense of encouragement with a pushing drive – an instant favorite I will for sure put in my outdoor running playlist.

In closing, the true test of Christian musicians is to glorify God in all they do at all times, without conforming to the world. I applaud For All Seasons, not only for their authentic lyrics that exude their heartfelt love for Christ, but their true musicianship. As I listened to their stories unfold in each song, it didn’t appear they were just retelling a story about Jesus, rather I felt they showed me how to feel His presence using their reverent giftedness.

More from For All Seasons: