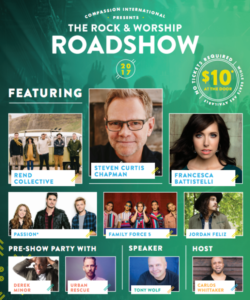 Admission will be $10/person and can be purchased at the door except for select cities, which are noted below in the tour listing. VIP tickets will also be available in two levels: The VIP Experience and The VIP PLUS Experience. Each VIP Experience ticket is $50, giving ticket holders early entrance for premium seating, pre-show artist appearances hosted by Carlos Whittaker, an exclusive VIP t-shirt, a souvenir bag and a tour laminate. The VIP PLUS Experience ticket is $95 a piece and includes all the benefits of the VIP Experience along with reserved section seating closest to the stage, an exclusive tour poster and more. VIP tickets can be purchased on the tour’s website, TheRoadshowTour.com.

This year’s must-see tour will hit 23 markets around the U.S., opening February 24 in Cape Girardeau, MO and wrapping April 2 in Baltimore, MD. Other key markets are Colorado Springs, CO, Ontario, CA, Phoenix, AZ, Houston and Dallas, TX, Indianapolis, IN and many more. The tour schedule is listed below.

“We are so excited to be able to bring the 9th installment of the Rock & Worship Roadshow to so many great cities around the country,” shares Brian Seay, Director of Compassion Productions and Executive Producer of the tour. “There is something for everyone, and each night of the tour promises to be an evening of amazing music and ministry. We cannot wait to share this evening with you!”

Compassion International is the world’s largest Christian child development organization, partnering with more than 7,000 churches in 26 countries to deliver its holistic child development program to more than 1.9 million babies, children and young adults. They are thrilled to continue sponsoring this remarkable tour.

Founded in 2009, The Rock & Worship Roadshow has performed nearly 200 shows to an audience of more than 1.4 million, and Pollstar named the tour one of their Top 50 Tours in 2012. For additional information, please visit TheRoadshowTour.com.

All dates are subject to change
Passion will not appear at 2/26 and 4/2 dates
The location and venue for the 2/25 and 3/4 dates will be announced shortly
*These selected cities have an alternate ticketing structure/artist lineup. Please see theroadshowtour.com for more details

ABOUT COMPASSION INTERNATIONAL:
Founded in 1952, Compassion International is a Christian child development organization that works to release children from poverty in Jesus’ name. Compassion revolutionized the fight against global poverty by working exclusively with the church to lift children out of spiritual, economic, social and physical poverty. Compassion partners with more than 7,000 churches in 26 countries to deliver its holistic child development program to more than 1.9 million babies, children and young adults. It is the only child sponsorship program to be validated through independent, empirical research.
For more information on the ministry, visit Compassion.com or follow them on Twitter.

STEVEN CURTIS CHAPMAN
In a career that has spanned 30 years, Steven Curtis Chapman is the most awarded artist in Christian music history with 58 Gospel Music Association Dove Awards, five GRAMMYs®, an American Music Award, 48 No. 1 singles, selling more than eleven million albums and with eight RIAA-certified gold or platinum albums to his credit. He has been on “Good Morning America,” “CBS Sunday Morning,” CNN, MSNBC, “60 Minutes,” E! Entertainment, “The Today Show,” “Fox & Friends,” “CBS This Morning,” “The Tonight Show,” Glenn Beck’s “The Blaze,” along with appearing in the pages of People, Billboard, Parents Magazine, and more. A vocal supporter of adoption, Chapman, along with his wife Mary Beth, founded Show Hope in 2003, a nonprofit organization that helps restore the hope of a family to orphans. With countless tours under his belt, Chapman continues to perform at numerous events and festivals. He most recently headlined the Songs & Stories Tour joined by Mac Powell from THIRD DAY and Brandon Heath, as well as the highly successful SCC3D: THIRD DAY Together with Steven Curtis Chapman Tour this past August. Chapman will release his anticipated memoir, Between Heaven & The Real World (Revell) March 7, 2017.

FRANCESCA BATTISTELLI
Inspired by legendary jazz greats and current contemporaries, singer/songwriter Francesca Battistelli set out to write pop, soul-infused music that would motivate and encourage listeners of any age. Her exposure to the arts began at a young age with her interest and involvement in theatre, music, and dance, and at 15, Francesca began writing and performing her own songs. With 1.7 million units sold, a GRAMMY® Award (four total nominations), a Billboard Music nomination, a RIAA Certified Gold selling album and single, 26 Dove Award nominations and six Dove Award wins including Artist of the Year, six No. 1 singles, two fan voted K-LOVE Fan Award wins, and music featured across multiple television and movie outlets, Francesca continues to be the standout female artist in the Christian Contemporary Music genre.

REND COLLECTIVE
Hailing from a small town off the coast of Northern Ireland, Rend Collective (Gareth Gilkeson, Chris Llewellyn, Ali Gilkeson, Patrick Thompson and Stephen Mitchell) wants to be known as a celebration band, worshiping for God’s Glory and fame. Since the release of their first album, Organic Family Hymnal, the group’s authentic and energetic style of worship has attracted an international audience, with career sales of more than 300,000 albums. The group saw early success as their first ever single “Build Your Kingdom Here,” peaked at No. 12 on the National Christian Audience Chart. Their 2014 release The Art of Celebration, charted at No. 1 on the Billboard Christian Albums Chart within the first week of its release. Known for their electric, lively worship, the band has been a part of several major tours with top artists such as Chris Tomlin, MercyMe, Kari Jobe, Lecrae and more. Rend Collective is headlining two tours this year, debuting As Family We Go, the group’s latest album. As Family We Go was released last year, hitting No. 19 on the U.K. Albums Chart and No. 9 on U.K.’s Digital Albums Chart, making it the highest debut for a Christian album in the U.K. in almost 20 years and the highest ever Christian album debut on the U.K. Digital Albums Chart.The album also hit the No. 1 spot on the iTunes Christian albums chart in the U.S., U.K., Canada, Australia and New Zealand and landed in the top ten albums overall in seven countries including the U.S., U.K. and Canada.

PASSION
From its start in 1995, Passion has been rooted in the confession of Isaiah 26:8 – Yes Lord, walking in the way of Your truth we wait eagerly for You, for Your name and Your renown are the desire of our hearts – existing to glorify God by uniting students in worship, prayer and justice for spiritual awakening in this generation. Passion has encountered millions of students and 18-25 year olds – young people whose lives have been transformed by the power of the holy spirit. One of the most impactful and stirring aspects of the movement has been the sea of voices uniting together to lift up the name of Jesus, currently helmed by Kristian Stanfill, Brett Younker and Melodie Malone. Songs such as “One Thing Remains” and “Even So Come” have become some of the most recognizable and unforgettable worship anthems of this generation. The 2016 release, Salvation’s Tide Is Rising, brings another strong collection of songs that build upon the legacy of global impact through worship. Passion is more than music. More than events. Passion is a generation living for His name. Their voice is getting louder as they rise, united as a generation, bringing hope and light to the world.

FAMILY FORCE 5
Hailing from the depths of the durrty south, the mighty Family Force 5 has spent the last eight years on a bombastic, arduous crusade, conquering clubs and arenas worldwide with an unrepentant swagger that has made the band the poster child for DIY business models in the music industry. Boasting a gritty concoction of mammoth beats, mouth-watering melodies, and explosive guitars, the dance-derived, fashion-forward five-some from Atlanta has crafted an impressive resume built on sweat and elbow grease.

JORDAN FELIZ
For Jordan Feliz, 2016 has been an incredible and breakout year for the talented singer/songwriter. He was just named by the GMA Dove Awards as New Artist of the Year, while also being nominated for both Song of the Year and Pop/Contemporary Recorded Song of the Year (“The River”). He was also a nominee at the K-LOVE Fan Awards in June for Breakout Single of the Year (“The River”). Feliz also released his first full album, The River, in April and it debuted at No. 4 on Billboard’s Christian Albums chart. The first single from the project, “Never Too Far Gone,” became his second No. 1 song.  His mega-hit tune, “The River,” released in 2015 and was the first single from his debut Centricity project, Beloved. The song remained No. 1 for ten weeks on Billboard’s National Christian Audience Chart and seven weeks on the CHR/Hot AC Chart. It remains in the Top 30 on iTunes Christian Singles chart. Feliz hails from central California and began his professional music career as the frontman for a mainstream rock band, before becoming a solo Christian artist, moving to Nashville and signing his first label deal with Centricity Music in 2015.

URBAN RESCUE
Urban Rescue, a worship band based in Los Angeles, is on a mission to write and produce music for their local community and world abroad. Their newest single, “Kaleidoscope,” an electronic influenced worship anthem, talks about God’s love changing the way we see the world. Fronted by Jordan Frye, the band is on mission to inspire the next generation of believers to see their churches, communities and cities awakened by the Gospel of Jesus Christ. Urban Rescue became the first official band to sign with Rend Family Records, a partnership with Capitol Christian Music Group and an endeavor stemming from the group’s heart for worship and community.

DEREK MINOR
Derek Minor is a member of a small, elite class of hip hop artists who are adept at MCing, producing, and running their own companies. Two of his albums, 2015’s Stellar Awards winning Empire and 2013’s Minorville, reached Number 6 on the Top Rap Albums chart, and 2011’s Dying to Live achieved the Number 11 spot. His wordplay and relatable lyrics have made him an in-demand collaborator who has worked with the likes of Lecrae, Andy Mineo, and Colton Dixon. Minor is slated to release his sixth album, Reflection, on October 14 on his Reflection Music Group in partnership with Entertainment One. As a producer, Minor received a 2015 Dove Award for his production contributions to Lecrae’s Anomaly album. Minor’s Reflection Music Group roster includes celebrated acts Canon, Tony Tillman, B. Cooper, and Deraj.

TONY WOLF
An established national speaker, comedian, musician and published author, Tony Wolf engages, enlightens and entertains people of all ages with his cross-generational approach. He has spoken in sold-out arenas, taught Fortune 100s, entertained on major music tours and shared his stories on college campuses everywhere from Florida State to Fresno State to North Carolina State. Tony has gone on tour with MercyMe, Sanctus Real, The Afters, Michael W Smith, Newsboys, Skillet and Third Day…just to name a few. Tony is also a top voice for Compassion International and has helped rescue over 19,000 children from poverty. Tony’s new book “Serve One” is available on Amazon and his new comedy CD is on iTunes. Tony lives in Westfield, Indiana with his wife Laura, three daughters Brooklyn, Katie and Adrienne and son Jude.

CARLOS WHITTAKER
Carlos Whittaker is an author and speaker living in Nashville TN. His best selling book “Moment Maker” is a call to help people live their lives instead of their lives living them. A social media maven, Carlos has won numerous awards for his digital presence including a prestigious People’s Choice Award for Viral Video of the Year. Carlos and his wife Heather live their adventure with their 3 children Sohaila, Seanna, and Losiah.