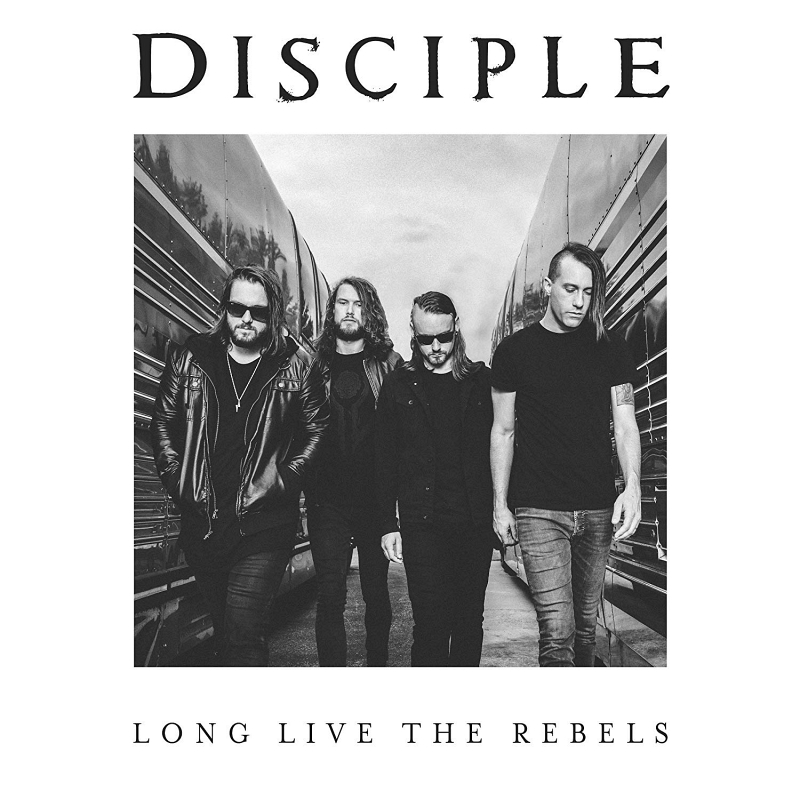 Following an incredibly successful Kickstarter campaign, the hard rock band Disciple releases their thirteenth album, and just their second studio album as an independent group. Long Live the Rebels is described by lead singer Kevin Young as a portrait of how Christians are set apart from the rest of the world. “While the world goes their way, we are the rebels who will walk the other way. We want to be the rebels who will change the world.” The band’s fanbase has remained strong throughout the years, as evidenced by the nearly $130,000 made from their Kickstarter campaign for this album. Two years ago, the group achieved an equally successful campaign that lead to the acclaimed 2014 album Attack. It is clear that fans want to hear more of Disciple’s music, and this album proves to offer fans exactly what they want.

Disciple kicks off the album with the upbeat “First Love,” the title being a reference to God and returning to him. Kevin Young acknowledges our need to be close to the Lord. The following title track provides a summary of the theme of the album, that “we are the misfit renegades…the outcast rogue brigade” in this world. While the words “rebel” and “mutiny” usually carry negative connotations, in this case they describe the reality of Christians living in a foreign land. As stated in “Secret Weapon,” our power comes from “a higher place.”

The song “Erase” is written from the perspective of God speaking to us and serves as a reminder of His healing power and that we do not need to dwell on our past sins. “Forget every regret. I’ll make perfection from this mess.” This transitions into “Come My Way,” focusing on the temptations we constantly face (“there’s no hiding from the whispering that’s like screaming in my ears”). Disciple confidently states “yesterday I might have said yes, but not today,” an inspiring response for fellow believers. Equally inspiring is “Underdog Fight Song” which is about determination and rising up from adversity.

One of the softer tracks on the record, “God is With Us” serves as a reminder that, as King David sang about in Psalms, our help comes from the Lord. In “Spirit Fire,” the band sings about the spiritual passion that comes from the Holy Spirit. Referencing Paul’s letter to the Corinthians, they sing “this fire that is burning in me is keeping me here running after the prize.” “Forever Starts Today” is an emotional journey about waiting for a close friend to accept Christ. “Every hour the suspense was burning, still I waited for the Holy Ghost to make his presence known.”

“Black Hole” is another song written in God’s perspective and reminds us of Christ’s sacrifice and love for us. “These stripes on my back speak love for you. These black holes in my hands exist to steal away every sin of the world.” Disciple gets deeply conscious in “Spinning,” a song that is lyrically reminiscent on Ecclesiastes. Lyrics such as “another disease is cured while another bomb is dropped…somebody’s tragedy is somebody’s victory” lead to a feeling of being “just a brain dead silhouette” as things seem meaningless. The album ends with “Empty Grave” which not just acknowledges the empty grave Christ left behind, but also the grave we are resurrected from through Jesus.

In 2014, Attack proved to fans the value of personally investing into their favorite band’s production. They will once again be highly satisfied with the results of this Kickstarter campaign. Long Live the Rebels starts off strong and never really slows down. The music is exactly what hard rock fans are looking for, and the message never disappoints. Disciple does an amazing job of incorporating scripture throughout their lyrics without lacking any focus on the music, resulting in a rock album that pleases both the ears and the soul.

About the Author: Justin Morden